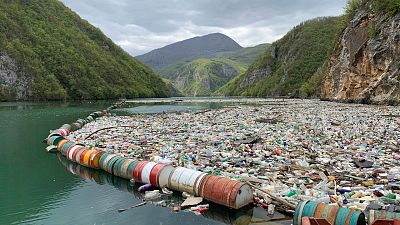 Plastic waste isn't the only threat to our environment   -   Copyright  Eldar Emric/Copyright 2019 The Associated Press. All rights reserved.
By Maeve Campbell  •  Updated: 27/10/2020

A new study warns that focusing on the environmental impact of plastic pollution may be counterproductive.

Experts at the University of Nottingham, UK, say public concern over plastic waste is overshadowing more pressing issues such as biodiversity loss and climate change.

Authors of the study argue that society has become attached to the issue as a result of the media showing us “emotive imagery of wildlife caught in plastic waste” using alarmist headlines. The researchers suggest that rhetoric around small lifestyle changes could detract from the government's accountability when it comes to climate policy and legislation.

Small gestures such as laws on banning microplastics, or financial incentives for using reusable bags and containers, risk making us complacent towards other more serious environmental issues, the study argues.

“We are seeing unprecedented engagement with environmental issues, particularly plastic pollution, from the public and we believe this presents a once in a generation opportunity to promote other, potentially greater environmental issues,” says Dr Tom Stanton, co-author in the University of Nottingham’s School of Geography and Food, Water, Waste Research Group.

“This is a key moment in which to highlight and address areas such as ‘throw-away’ culture in society and overhaul waste management. However, if there is a continuation in prioritising plastic, this opportunity will be missed – and at great cost to our environment,” he concludes.

The research also suggests that conversations around plastic waste, involving data, may not be accurate. Data doesn’t always take into account the environments that have been sampled, say the scientists.

Plastic alternatives can be harmful too

Our eagerness to avoid plastic products might in turn lead us to use alternative materials, like glass, aluminium and paper, which may have “potentially greater harmful effects.”

Other polluting materials deriving from human activity include natural textile fibres such as cotton and wool, Spheroidal Carbonaceous Particles (remnants of fossil fuels), and brake-wear particles from vehicles. But due to the dominance of the plastic discourse, we’re not talking about these as much.

The study recommends that positive action to minimise plastic pollution be “well-informed” going forward. In order for this to take effect, it is down to both the media and governments to make sure the reality of plastic pollution is never misrepresented, while ensuring that a culture of over-consumption continues to be discouraged.

Plastic pollution certainly poses its own challenges, threatening food safety and quality, human health, coastal tourism, and contributing to climate change, according to the IUCN. But this new research shows that other forms of environmental degradation are just as grave, particularly when associated with alternative materials.