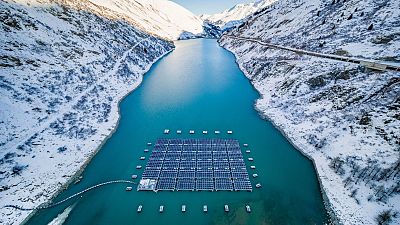 This reservoir doubles as a floating solar power plant, smack back in the middle of the Swiss Alps.

Not only does the high-altitude project boast some stunning views, it won the prestigious Swiss Watt d’Or prize, as the best in renewable energy innovation 2020.

The power plant is located on the Lac des Toules reservoir in Valais, Switzerland, at an altitude of 1,800 metres above sea level.

This lake already serves as a hydropower station but is now harvesting additional solar power. High up in the Swiss mountains, the atmosphere is rarer, solar radiation stronger, and in winter the snow can reflect the sunlight.

Romande Energie is the company behind the project. According to the founders, the unique alpine conditions are what allow the solar panels to act so efficiently. They can harvest 50 per cent more power than similar floating solar plants in lower altitude.

They certainly have potential. However, the pilot project needs to first prove it is feasible over a trial period of two years. The development and implementation together cost over €2.2 million. In total, this process took six years and ten months get the floating panels up and running in alpine conditions.

"Our plan is first to extend this project on the lake of Toules, but also to duplicate this kind of technology on another lake," says Fuchs.