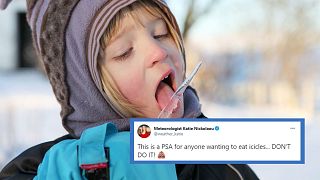 Although icicles may look like tempting natural ice lollies, a meteorologist has warned that what's inside them can be pretty lethal.

Katie Nickalaou of KMEG, known as @weather_katie on TikTok, posted a video in response to another user who was seen crunching down on an icicle.

“Please don’t do that,” she warns, “I’m a meteorologist, I should know.”

She goes on to explain that icicles are created when water runs off your roof and then freezes. That water picks up whatever is lingering on top of your house, before solidifying into columns of ice.

“You know what else is on your roof? Bird poop, a lot of it,” Katie explains.

Don’t eat icicles! Please respect the fact that I edited out the original woman in the video (I have her permission) ##IciclePoop

Katie's video has amassed millions of views on social media. She told Yahoo Life that she decided to create the TikTok hit after seeing people eating icicles pulled off roofs and car exhaust pipes.

"In order for water to condense and form rain or snow, it needs cloud condensation nuclei," she said, "that’s a fancy term for a piece of dirt, salt, carbon or dust.”

That means icicles from roofs could contain tar, lead or bird poop and those from car exhausts may be filled with pollution.

Is an icicle the "perfect murder weapon"?

After her first video went viral, Katie also debunked the idea that the pointy pieces of frozen water are “the perfect murder weapon”.

In the TikTok clip, she goes to stab a friend in the back with an icicle which breaks into tiny pieces before doing any damage. Katie explains that while icicles which fall from above can be dangerous, they are unlikely to break the skin if used as a weapon.

Reply to @_california_girly They won’t impale you, but they can cause blunt force trauma ##DontDoIt Thanks @katiecopple for doing this ? ##Icicle

But ice aside, you probably shouldn’t be eating snow either - and not just the yellow kind.

In 2016, scientists in Canada found that the flakes of frozen water soaked up toxic pollution from car exhausts which can be carcinogenic.

After just an hour of being on the ground, snow had absorbed enough common pollutants that it may "influence human health" - even if you don't choose to put it in your mouth.

Cars are a significant contributor to air pollution with toxic air levels in London dropping by 94% last year as people chose to walk and cycle more. Check out some of our other articles the issue here.