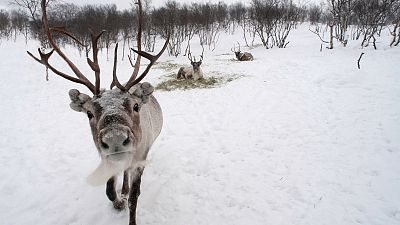 It's not just polar bears who are facing challenges because of the climate crisis, reindeer in the Arctic are also under threat.

Reindeer herding is integral to the livelihood of Sweden's Indigenous population, the Sámi people. With milder winters in Sweden, members of the community say that changing weather patterns are forcing them to travel further and spend more money searching for food to save their animals from starvation.

Higher temperatures cause snow to thaw and freeze again. When the cold returns, thicker layers of ice build up, which prevent the reindeer from digging down through the snow to access lichen. Lichen is a type of fungus which sustains reindeer throughout the winter months.

Finland is struggling too

Heders in Finland face similar difficulties, as the country is home to about 200,000 reindeer.

In snow-covered Lapland, 1,500 herders rely on the animals for their livelihood. Reindeer are bred for their meat, milk and fur. However, scientists are concerned that climate change has already had a negative impact on these animals.

"The Finnish Meteorological Institute has made research that shows us that mean temperatures have increased one degree and a half in Lapland over the past 150 years," says Lefrere, who is based at the Finnish Environment Institute.

"They have also made models that predict that in the future under the high emission scenario the temperatures - actually we're speaking in average, of course - at mid-winter, are going to increase between four and ten degrees (Celsius)," she adds.

As a result of the changing weather conditions, the reindeer have less food. A 20-year study by Scotland's James Hutton Institute found that reindeer were getting smaller and lighter.

Click on the video above to learn more about Arctic reindeer and climate change.

Christmas traditions around the world