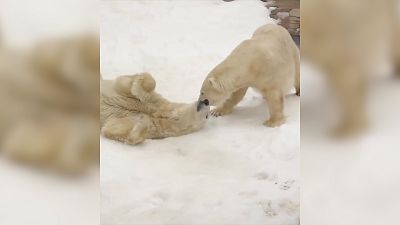 Polar bears in San Diego Zoo were delighted by unexpected snowfall this week - and they weren't the only ones!

The California city experienced a rare snow day - one of only a handful from the last 125 years. The last time measurable snow fell in San Diego it was 1967, with snow flurries seen in 2008 too.

The polar bears were caught on film rolling in drifts, eating snowballs, and burying themselves in the snow.

Snowstorms have left remarkable scenes across much of the US too. The states of New York, Minnesota, Iowa, Kansas, Arizona and Nebraska will also welcome the New Year covered in snow.

Elsewhere, Europe faced Storm Bella with winds of up to 100 kph as well as heavy snowfall.

From the US to Europe, heavy snowfall has been paving the way to 2021. ❄

Here are a few extraordinary scenes you don't want to miss. pic.twitter.com/ghzQfak9HJ

A large amount of snow fell across the Pyrenees on the border of France and Spain. A number of Spanish provinces were put under orange or yellow weather warnings due to snow. In France, more than 30 cm fell in the western Pyrenees overnight on 30 December.

The Italian cities of Milan and Trento have also been left snow-swept, with the latter experiencing the “fastest snowfall in 100 years,” according to local authorities.