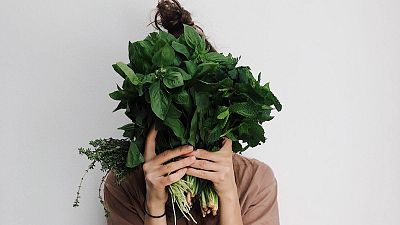 I’ve been vegan for a few short years and vegetarian on and off for most of my life, but in that time I’ve been asked ONE question more than any other. And I’m here to tell you it is both irritating and incredibly misguided: where do you get your protein from?

Facepalm. Although in truth, I’m pretty sure I didn’t know where I’d get my protein from before I quit meat, such was the media’s obsession equating meat with protein. With high-protein diets often consisting of ‘lean chicken’ or fish with every meal it’s understandable so many of us are perplexed as to where to get this important food macro, to utilise another irritating term.

And the diet market is awash with protein shakes, protein bars and balls offering that all important energy needed for athletic prowess. So it’s little wonder so many of us feel our diet is lacking without an abundance of the powerful stuff.

But as with anything in marketing, it’s super important to read behind the headlines. Never more so when shifting your diet to something new, exciting and, perhaps, a little bit unknown.

Record year for Veganuary in 2020

My first indication there was literally nothing wrong with my diet was a very healthy pregnancy. The second was the fact I’d never felt healthier, or more active. When I made the switch to a plant-based diet back in 2016, veganism was on the rise, but not to the extent it is now.

I never took the official vegan pledge myself, but every year I watch in wonder as more and more people sign up and hosts of plant-based folk pop up too; from athletes like boxer David Haye to cyclists and runners, it’s totally possible to achieve big athletic feats without the meat-based sources of protein. In fact, many say they’ve increased their fitness since making the change.

So there are more people than ever choosing plants over meat, yet the endless question and myths remain. And the protein myth is perhaps the most innocuous of the bunch.

Veganuary believes this proliferated via incorrect daily allowance estimations, "our fascination with protein" stems from the incorrect early recommendations of dieticians, going on to highlight that people were advised to eat “twice the amount that we truly require, according to today’s government recommendations."

In fact, those high protein diets can be problematic.

How much protein should I be eating?

So how much do we actually need to eat to survive? I spoke to Dr Samantha Gill, a nutritional science researcher at King’s College London, who gave me the skinny. She clarified that “contrary to popular belief, it’s entirely possible to meet your protein requirements on a daily basis while following a vegan diet.”

By now, you might be feeling calmed by the fact you are almost certainly getting the protein you need….*puts down the pink protein shake*, but can we just talk about the point of protein, please? Because although I know I get enough and you probably do too, I also know protein plays an important role in our bodies daily functioning.

The Vegan Society explains, “protein gives our bodies structure as part of our muscles and bones. It is also used for fighting infection, carrying oxygen, growth and repair.” so yep, it is important to ensure we maintain a healthy level in our diets.

But how? Well, if you’ve recently embarked on a plant-based diet you might still be getting to grips with scrambled tofu and the magic of nutritional yeast without worrying too much about protein.

So when you are asked that inevitable question, which you WILL be asked, don’t worry - there's a HEAP of plant-based foods packed with protein.

“For the general healthy population, as long as you’re mixing it up and having a wide variety of plant-based foods in your daily diet (e.g. beans, lentils, nuts, seeds, grains such as quinoa, soy, plant-based milk) you’ll generally be getting all the protein that your body needs.”, says Dr Kelly.

Vegan chef Benarsh Laly knows a thing or two about creating delicious, nutritious vegan food for his vegan recipe box Leafychef. He explains that “people often assume that a diet without animal products will cause one to slowly waste away due to protein deficiency, forgetting that protein is found in ALL plant-based foods!”

So next time you reach for that protein bar, stop and grab yourself a pot of hummus instead, safe in the knowledge you get plenty of protein, even as a vegan.