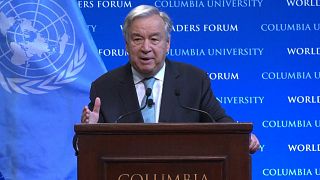 UN Secretary-General Antonio Guterres called on humanity to end the 'war on nature' in a landmark speech. It marked the beginning of a month of UN-led climate action, which coincides with the fifth anniversary of the 2015 Paris Climate Agreement.

As a record-breaking year for hurricanes, wildfires and heatwaves comes to an end, the head of the United Nations challenged world leaders to make 2021 the year they all commit to a future free of planet-warming carbon pollution.

He issued stark warnings that "the state of the planet is broken". He also added, however, that recovery from the Covid-19 pandemic could be humanity's chance for a reset to save the planet.

2020 is on track to be 1 of the 3 warmest years on record.
The past decade was the hottest in human history.

A new @WMO report spells out how close we are to climate catastrophe.

Just before the speech, the World Meteorological Organization released a report stating that 2020 will go down as one of the three hottest years on record. This year is set to end about 1.2 degrees Celsius (2.2 degrees Fahrenheit) warmer than pre-industrial times (the last half of the 1800s). The main sources of global warming are the heat-trapping gases released when coal, oil and natural gas are burned. Most trapped heat goes into the world's seas, and ocean temperatures are now at record levels.

Guterres saw hope in promises made by more than 100 countries that by mid-century they will not be adding more heat-trapping gases to the atmosphere than trees and technology can remove. China, and US President-elect Joe Biden have pledged net-zero carbon emissions.