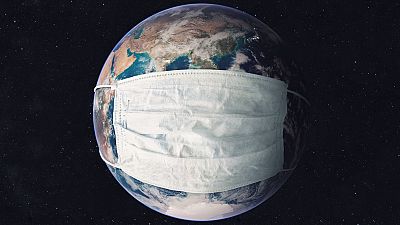 There is no vaccine for climate change   -   Copyright  Dmitriy Miller via Shutterstock
By Maeve Campbell  •  Updated: 14/12/2020

One UK scientist has a different take on the news of the COVID-19 vaccine rolling out.

Dr Debbie Trebilco appeared at a Rural Commission meeting in North Yorkshire this week, warning that climate change must not be forgotten amid the global health pandemic.

“There is no vaccine for climate change,” she says adding that we can’t just “flick a switch and it will all go away.”

She compares the two crises like for like, stating, “we are coming through an existential pandemic crisis and now have to face the existential crisis of climate change.”

The statement comes after a similar warning by UNCTAD (United Nations Conference on Trade and Development) in June of this year. As societies all over the world make sacrifices to combat coronavirus, the same determination and political will “has been missing in the fight against climate change,” states the UN intergovernmental body.

With all our attention focused on the pandemic, we’ve paid “considerably less attention” to global warming in recent months, the report continues. “Like the virus, greenhouse gases are invisible and remain ever present in our natural surroundings.”

Economist Robert Hamwey and Public Information Officer UNCTAD Tim Sullivan attribute the lack of progress on the world’s stage with both a lost sense of urgency and decades of talk, with little headway being made.

What can we learn from Debbie Trebilco’s approach in North Yorkshire? The scientist’s career spans 30 years in both the US and the UK. Her extensive knowledge and experience in climate change initiatives and renewable energy make her a voice of reason in an uncertain time.

After having worked abroad, she has now made it her mission to make a difference to climate change in her local area.

She set out to lower the carbon footprint of the North Yorkshire Valley in 2012. Through launching a community hydro electric generator, she now encourages students to study all aspects of the hydro scheme, from civil engineering to fish transit across the River Burn’s weir.

The scientist’s powerful statement that no vaccine exists to solve climate change, comes with ambitious plans for the region to reach carbon neutrality ahead of national targets.

“There are up to 17,000 new jobs across Yorkshire and Humber as a direct result of moving through this transition to renewable energies.”

The North Yorkshire Rural Commission is leading the way as a British region determined to examine a broad range of environmental issues in the area. From farming, schools and transport, to jobs, digital connectivity and housing, the council is doing all it can to reduce carbon emissions in the area and promote renewable energy.

Bigger cities like London, for example, could learn a lot. Although the capital’s environmental strategy has been set out by the mayor, it faces a whole host of challenges as a result of its size and population density. Toxic air, noise pollution and infrastructure threatening green spaces are all factors to be addressed sooner rather than later.

Imagine the positive impact this could have!

There might not be a quick win when it comes to climate change, but Trebilco is optimistic for the future, focusing her efforts on skills and education which can benefit young people. “Imagine the positive impact this could have! More higher-paid jobs, more children in our rural schools, more vibrant communities.”

As Hamwey and Sullivan would attest on a global scale, the key to making real environmental change is “to do our part, change our habits and daily routines," much as we have done with the pandemic so far.

“If we can convince ourselves to do the same in the fight against the climate crisis, we will finally start to see real progress.”

UK to announce climate target more 'ambitious' than the EU