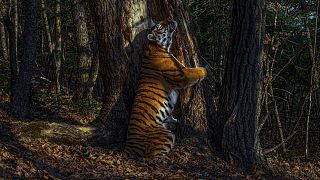 An image of a rare Siberian or Amur tiger has won the Wildlife Photographer of the Year competition.

Photographer Sergey Gorshkov captured the photo in Eastern Russia, using a hidden camera trap which was triggered with a motion sensor when animals walked by. As with most wildlife photography, it was a matter of extreme patience as it took him more than 11 months to finally get the picture he has titled “The Embrace”.

A female tiger is seen marking her scent on a tree, in the Land of the Leopard National park in the Russian Far East. Considered the same subspecies as the Bengal tiger, the Amur tiger is only found in this region, with small numbers across the border with China and possibly a few in North Korea.

Chair of the judging panel Roz Kidman-Cox said the image was “a unique glimpse of an intimate moment deep in a magical forest.”

“It’s also a story told in glorious colour and texture of the comeback of the Amur tiger, a symbol of the Russian wilderness,” she added.

Due to hunting and logging, the Amur tiger was in trouble at the beginning of the 21st century. The wild boar and deer they hunt are also threatened by deforestation, meaning that they have to travel vast distances in order to find food. This makes sightings of the majestic creatures few and far between.

Sergey knew his chances of getting a picture of elusive creatures was slim but he was determined to photograph the animal that is such a distinct symbol of his Siberian homeland. He looked for signs like scent, hairs and scratch marks to decide where he was most likely to see a tiger.

The area where he paced his camera trap in Primorsky Krai, Russia is a 2,799 square kilometre national park set up to protect another of the world’s rarest cats, the Amur leopard. Tigers in the region have benefited too and the ancient fir forest is now a stronghold for the species.

Thanks to these conservation efforts, unpublished camera trap surveys have revealed that numbers are likely increasing with an estimated population of 500-600 individuals.

“Hunted to the verge of extinction in the past century, the Amur population is still threatened by poaching and logging today,” says Dr Tim Littlewood, Natural History Museum’s Executive Director of Science and a member of the jury which judged the photos.

“The remarkable sight of the tigress immersed in her natural environment offers us hope, as recent reports suggest numbers are growing from dedicated conservation efforts.”

Sergey’s image was selected from 49,000 entries from around the world and his win was announced by the Duchess of Cambridge at an online awards ceremony earlier this week. Alongside 100 other images showcasing the natural world, the photo will be on display as part of an exhibition at the Natural History Museum in London.

The exhibition will also be touring to international venues in Australia, Canada, Denmark, Germany and more.

_Wildlife Photographer of the Year is developed and produced by the Natural History Museum London. _