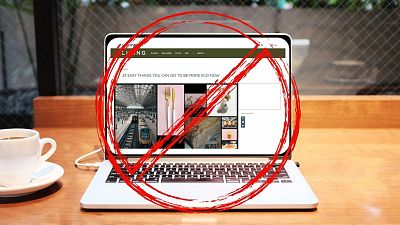 We’re all used to articles popping up in our inboxes, offering advice on ‘eco-friendly’ tips to live a more sustainable life. But according to one study, we don’t like being told what to do.

It turns out recommendations on how to reduce our carbon footprint actually make us less likely to take action on the climate crisis, scientists at Georgia State University (GSU) have found. The results of the research have been published in a study titled “Don’t Tell Me What to Do”.

Tips like these have become increasingly common online, with everyone from top environmental organisations, governments and even Facebook offering people lists of ways they can lessen their impact on the planet. But until now, very little research has been done into whether they actually do anything to change people’s behaviour.

Researchers at GSU showed different messages about climate change to nearly 2,000 people and then measured their responses.

Participants were shown one of six messages: either just a statement about the threat of climate change, or the same statement followed by different recommendations about personal and political actions.

People who saw messages which recommended personal action, like taking fewer flights or reducing the amount of meat in their diet, were less willing to do anything to reduce their carbon footprint than those who just saw the initial statement.

They were also less likely to report that they believed climate change was caused by humans or vote for political candidates who supported climate action.

The research states that we turn “messages that imply the need for individual sacrifices [...] into a negative response to the entire message, including an increased skepticism about climate science and trust in climate scientists.”

Whether the messenger was a climate expert or not didn’t seem to matter either, people were still discouraged. The study found that recommendations for personal behavioural change could even erode the trust that people have in environmental scientists.

How we communicate about climate change matters

Changes to our behaviour are necessary to save our planet, but they have to come alongside more widespread political and systemic action to combat the scope of the problem. The study shows that how we communicate this definitely matters.

It wasn’t necessarily that people didn’t want to help the environment but that nagging made them react badly because they didn’t feel like anything they did could make a difference.

Showing and doing, rather than telling, might be a better approach. The ‘flygskam’ or flight shaming movement, popularised by Greta Thunberg, demonstrated this as it spread across Europe last year.

As more people became concerned about the environmental impact of their air travel and pledged to avoid flying, this inspired others to change the way that they travel.

Inspired by the actions of others, domestic air travel dropped by 9 per cent in Sweden and 12 per cent in Germany. In 2019. A study by Swiss bank UBS found that over a fifth of people they asked in the US, France, England and Germany had cut down on the number of flights they had taken in the last year.

As founder of The Climate App, Samuel Naef, told Euronews Living earlier this year; “it is much more motivating to understand how the changes you make relate to those your peers are making, and how it all contributes to a larger end goal.”