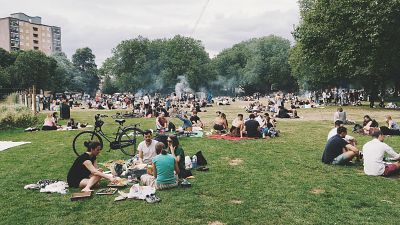 If global energy consumption were to be cut by 60 per cent by 2050, 10 billion people could still benefit from decent living conditions, a new study has found.

Scientists at the University of Leeds estimated how much energy would be required to provide basic human needs like food, water, mobility, shelter and hygiene, to the world’s population. They also factored in more modern necessities like high-quality healthcare, education and access to technology including phones, computers and the internet.

The study found that decent standards of living could be provided to a growing global population for less than 40 per cent of the energy used around the world today. This means that clean energy could easily suffice for the expected 10 billion people living on our planet by 2050.

“Currently, only 17% of global final energy consumption is from non-fossil fuel sources. But that is nearly 50% of what we estimate is needed to provide a decent standard of living for all in 2050,” says Dr Joel Millward-Hopkins, lead author of the study.

“Overall, our study is consistent with the long-standing arguments that the technological solutions already exist to support reducing energy consumption to a sustainable level.”

Radical changes don’t mean a “return to the dark ages”

It is overconsumption by the world’s wealthiest people that needs to be reduced, the study concluded, allowing for global and national inequalities to be flattened. Fighting the idea that “more is better”, energy consumption would need to be cut by nearly 95 per cent in countries with the highest consumption per person.

The study’s authors stress that to create this vision, radical changes to all aspects of our lives would need to be made - but this did not mean a “return to the dark ages”.

“While government officials are levelling charges that environmental activists ‘threaten our way of life’ it is worth re-examining what that way of life should entail,” explains co-author, Professor Julia Steinberger.

Everyone would still have an adequately sized house, access to clean hot and cold water, a washing machine, fridge-freezer, laptop and smartphone.

Their estimates allow for more energy to be used by those in very hot or very cold countries, in order to keep indoor temperatures comfortable. They also allow for more travel for those in remote areas. Everyone would still have an adequately sized house, access to clean hot and cold water, a washing machine, fridge-freezer, laptop and smartphone.

In their estimates, the team also included enough hospitals and schools for universal access and proposed three times as much public transport for those in the wealthiest countries.

“It is clearly within our grasp to provide a decent life for everyone while still protecting our climate and ecosystems,” adds Professor Steinberger.