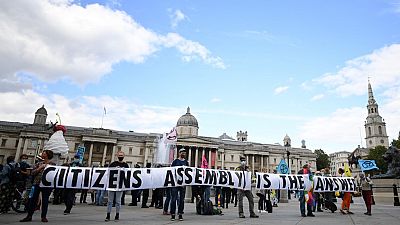 This week the first UK Climate Assembly published its final report, providing suggestions on how the government can reach net-zero carbon emissions by 2050.

The report shows how a representative sample of the country’s population believes we should meet net-zero targets on time and offers recommendations across 10 different areas.

Recommendations included taxes on frequent fliers, a cut in meat and dairy consumption and better green transport links for all parts of the country.

Members of the assembly also agreed throughout their discussions that fairness, education, strong leadership and freedom to choose were vitally important if the government is to achieve its goal 30 years from now.

But how and why did this group of over 100 ordinary citizens get involved with helping the government fight the climate crisis?

How does a citizens' assembly work?

A citizens' assembly on the climate is all about bringing public voices into the debate and discussing what we should do to tackle the ongoing crisis. In the UK, this meant ensuring people from typically underrepresented groups were included in the conversation.

The assembly’s organisers sent 30,000 letters to UK addresses across the country. Of these invitations, 80 per cent were entirely random while 20 per cent were randomly selected from postcodes in some of the most deprived areas of the country.

This process created a pool of potential assembly members from all kinds of backgrounds and locations. Using random computer sampling, a representative group of 110 people was selected to take part. The group then committed to spending 60 hours learning about and debating climate change, meeting over six weekends to come up with their recommendations.

It’s a technique that has been used by countries across Europe, to solve problems that government debates couldn’t settle on or that would end in a stalemate. Ireland, for example, set up an assembly in 2016 to help reach a decision about abortion laws.

Parliaments in some regions of Belgium are even experimenting with handing some of their powers to a citizens' assembly in what has been called a “historic” democratic move.

It is an increasingly common approach to dealing with climate issues too. Recently a group of 150 French citizens, as part of the Convention Citoyenne pour le Climat (CCC) provided their government with a number of environmental policy recommendations.

The group was set up by President Emmanuel Macron after protests about environmental taxes in France to make policymaking around the climate crisis more transparent.

Will climate assemblies be taken seriously in the UK and France?

There are some significant differences between how the recommendations from both citizens’ assemblies will be addressed by governments in the UK and France.

Emmanuel Macron commissioned the CCC in 2019 on the suggestion of the Gilets Citoyens and Democratie Ouverte. At its inception, he agreed to submit its final consensus to a referendum, parliamentary vote or decree “without filter”.

All but three of the group’s 149 recommendations were accepted by Macron. Some of the proposals have already been adopted, including the creation of two new regional parks and a nature reserve.

In the UK, the assembly was not commissioned by the government, but by a group of committees in parliament. By contrast, this means that there is not necessarily an obligation for the assembly’s recommendations to be taken on board.

So far, the heads of these six committees have written a letter to Prime Minister Boris Johnson urging him to act on the Climate Assembly’s report and show “leadership at the very highest level of government”. They also wrote a letter to heads of the opposition party, emphasising that cross-party cooperation was essential for reaching net-zero emissions.

The letter asks Johnson to ensure the government acts on the green recommendations before the UK hosts COP26 in November 2021.