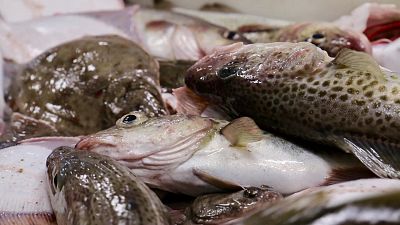 Fishermen in Poland are concerned for the future of their industry.

For months, their vessels could not leave port due to the ongoing ban on catching cod - a restrictive measure that scientists deem necessary to save collapsing stock populations in several European seas.

In this edition of Ocean, Euronews meets those who have been directly affected by the ban - and explores why cod stocks are in such decline.

IMPACT OF COD BAN ON FISHERMEN

Crews and owners of cod trawlers are feeling the pinch.

After seven years of fishing in Norway, Tomasz Wójtowicz recently returned to Kołobrzeg, Poland, hoping to build business in his homeland.

"My trawler, all the equipment, the infrastructure, the whole budget we had, all that was intended for cod fishing. Now everything has changed, we can no longer fish at all, and it is unclear when we will be able to fish again or what shall we do instead of fishing cod," Tomasz Wójtowicz, Skipper and co-owner of KOŁ-111, said.

Even accidental by-catch of cod was banned until September, so vessels targeting other Baltic species like flatfish, herring or sprat could not go out to sea either.

Local fishers say they did not have time to prepare, having learned of the restrictions only two days before they took effect in early June.

"For us this is like a knife in the back. We missed the best herring season this year. The biggest fishing months are May, June and July, and we had to wait through most of that period at the port due to the cod protection measures. We will be able to fish for herring for the remainder of the year, but the lower volumes of the catches won't make that economically profitable," he said.

Cod is the most popular white fish in Europe and the most valuable local species.

One factory in Kołobrzeg, built with EU support, was processing 1,500 tons of it a year - but now it has to import cod from Norway, operating at a small fraction of its capacity.

This, combined with COVID impacts on the markets, caused it to make redundant almost half of its workers, going from 75 down to 43 employees.

"What frightens us the most is that by the time things return to normal, we will no longer have any workers left able to process Baltic cod. With distribution chains broken, we won't be able to sell our product. Small shipyards that service the entire fishing fleet will shut down, and we'll have trouble repairing nets, as all the net makers will be gone. So even here, at our local market, instead of Baltic cod we'll only have cod from the Atlantic."

Euronews visited another business affected in the area - a small shipyard used to build new fishing vessels every year.

The hanger at the shipyard is empty.

After learning about the fishing ban, several clients cancelled their orders.

The owners of the shipyard said they consider themselves a part of the fishing sector - but without any assistance to compensate for their losses, they feel abandoned by the government.

"I am simply disgusted by this whole situation, because we are an only and exclusively fishing shipyard - one hundred percent of our activity are services for fishermen. But we have been deprived of any sources of aid. And since we are a small group, not a big community, we cannot manage to have our voices heard."

Scientific surveys indicate an urgent need to rebuild eastern Baltic cod stocks before the species is extinct - and to prevent further damage to the marine environment.

Researchers from the National Institute of Aquatic Resources in Denmark said there is no consensus on why cod populations fail to reproduce.

However, it said that several factors seem to be at play.

Stefan Neuenfeldt, who works at the National Institute of Aquatic Resources, explained:

"Basically, nature is against cod for the time being. And I do not see that that is going to change in the next decade. That's not good news for fishermen relying on cod. All we can do is preserve the cod, the places where nature is in its favour. And then we can see too, if conditions are getting better, that these preserved areas are the source for recolonisation of the areas which are so far basically uninhabitable for cod because they are too warm or because there's not enough oxygen."

Fishing pressure is the only factor of cod depletion that can be effectively controlled - so scientists have advised continuing restrictions.

In the meantime, improved assessment methods and models should help explain the alarming age and size dynamics that are driving the collapse of the stocks.

"They are getting thinner. And what is of large concern for us is that they are having their first maturity — they're spawning — in a smaller and smaller size compared to what we saw in the beginning of the 90s. Normally if we were only looking at the size of the cod, we would expect it would be much younger, but we can actually see that for cod above 30, 35 centimetre, that they have decreased the growth by nearly more than 50 percent compared to what we have seen in earlier years," Marie Storr-Poulsen, Head of Section for Monitoring and Data, DTU Aqua, said.