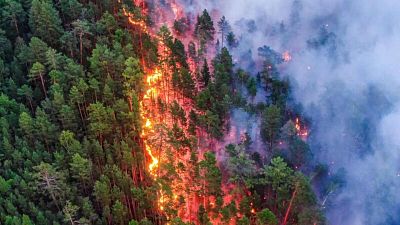 While we may be enjoying the unusually warm weather in Europe, it isn’t good news for the planet. This July was the third warmest on record, with only 2016 and 2019 recorded as hotter according to the Copernicus Climate Change Service.

The first temperature records date back to the 19th century and last month was one of the hottest since then. The news comes as Western Europe is in the midst of a heatwave with temperatures in Spain predicted to reach over 40℃.

In June, residents were evacuated from an area of northern Italy as Mont Blanc glacier threatened to collapse in the extreme heat. A chunk of ice that would fill the Royal Albert Hall in London more than five times was at risk of breaking away from the glacier.

The extreme heat has been linked to fires in Siberia which, according to satellite imagery, have so far this year burnt an area larger than the country of Greece. Greenpeace says that a common cause of these fires is large scale burnings associated with logging, which get out of hand.

This summer has already brought heat waves, oil spills caused by thawing permafrost and raging forest fires, he concludes, “what next before we finally act on climate?”.