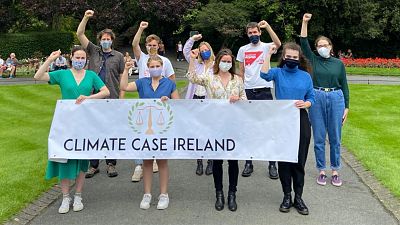 A group of citizens have just won a landmark case against the Irish government for failing to take adequate action on climate change.

Climate Case Ireland was started by Friends of the Irish Environment and is the first case in Ireland to hold the government to account for its contributions to dangerous levels of climate change.

In 2017 the National Mitigation Plan was approved in the country setting out measures to reach a low carbon economy by 2050. The case argued that these measures do not go far enough in providing short term requirements to quickly reduce greenhouse gas emissions.

It claimed that the 2017 plan is inadequate and violates both Irish law and the European Convention on Human Rights. Friends of the Earth Ireland called the judgement "a huge win" saying that "government must now act to protect citizens from the worst impacts of climate change".

Clodagh Daly, spokesperson for Climate Case Ireland (CCI), told Euronews Living that they were "overwhelmed" at the decision which was reached so quickly by the Supreme Court.

All seven Supreme Court Judges made the unanimous decision this morning with Chief Justice Frank Clarke saying the government's plan “lacked the specificity to comply with the law.”

He added that a sufficient plan "is not a five-year plan but rather a plan covering the full period remaining to 2050".

Daly says that the group are "so grateful to the lawyers who dedicated their time to the case" and are thankful to supporters across Ireland who backed them. She says that it is "a victory for everyone" not just CCI. "The national conversation on climate justice has been transformed over the last few years."

Daly believes that victory has "put the government on notice" showing that it "cannot make promises that it will not fulfil". She hopes that the country will see substantial changes to climate policy in the future adding that CCI will continue to hold them to account.

The government will now have to come up with a new plan.

Climate Case Ireland says that its decision to take action was inspired by other climate cases around the world. In December 2019 the Dutch Supreme Court upheld a decision which found that the Dutch government had obligations to urgently reduce its emissions to meet human rights obligations.

The Supreme Court victory was brought about by a partnership between an NGO and 900 Dutch citizens. It upheld an earlier ruling which required the government to cut greenhouse gas emissions by 25 per cent by 2020.

At the time UN Commissioner for Human Rights, Michelle Bachelet applauded the decision saying that it provided a basis for other citizens to take action:

“This landmark ruling provides a clear path forward for concerned individuals in Europe – and around the world – to undertake climate litigation in order to protect human rights.”

Seven things to learn on the Arctic from documentarian Louie Palu