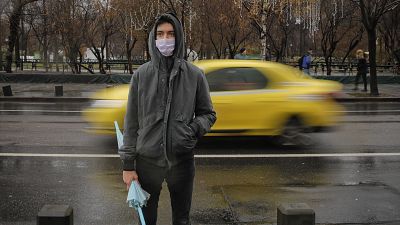 A man wears a mask during an anti-pollution protest outside the city hall in Bucharest, Romania   -   Copyright  Vadim Ghirda/Copyright 2018 The Associated Press. All rights reserved.
By Rosie Frost  •  Updated: 30/07/2020

Europeans have gained an average of nine extra months of life expectancy, thanks to successful air pollution regulations.

Since the creation of the European Environment Agency, resulting emissions targets have meant European citizens are now exposed to 41 per cent less particulate pollution than they were two decades ago.

This insight was published in the Air Quality of Life Index which takes air pollution concentrations and looks at their impact on life expectancy. Created by the University of Chicago (UoC), the report allows governments to see the results of successful or unsuccessful pollution limiting measures in real terms.

Scientists creating the AQLI say that the particulates in polluted air are “working unseen inside the human body” and have a “more devastating impact” on life expectancy worldwide than diseases like HIV/AIDS or risks like cigarette smoking.

A demand for change from citizens and subsequent strong policies have helped to clear the air in parts of Europe before, and can continue to do so to ensure that high pollution today does not need to be tomorrow’s fate.

In Europe, the introduction of clean air programmes and fuel emissions standards has largely been successful in decreasing pollution. Micheal Greenstone, director of the Energy Politics Institute at the UoC said that this was evidence of Europe’s “legacy of environmental improvement”. He added that it shows current “pollution hot spots” how to achieve cleaner air.

“A demand for change from citizens and subsequent strong policies have helped to clear the air in parts of Europe before, and can continue to do so to ensure that high pollution today does not need to be tomorrow’s fate.”

Is our air clean enough yet?

While there have been improvements in pollution levels across Europe, nearly three-quarters of the population still live in areas which don’t meet World Health Organisation guidelines for clean air. The report specifies that if countries across the continent met these strict guidelines, European life expectancy would increase by another 3 months.

According to the AQLI, Poland is the country with the most polluted air in Europe. Warsaw and Łódź have the worst air quality, meaning improvements there could see their populations gain an extra 1.2 years on their expected lifespan.

Coal-fired power is important to the Polish economy with nearly half of all electricity generated this way in 2018. Recently, the government started talks to phase out the use of fossil fuels and speed up the country’s green transformation. But cuts to the EU fund to make sure that workers aren’t impacted by these changes have held up this transition as trade unions warn it could lead to social disaster.

Another pollution hotspot can be found in Italy’s Po Valley, the region in which the city of Milan is located. Milan is the second most populated city in the country after Rome and the fourth largest city in the EU.

Although Italy is overall less polluted than the European average, improvements to air quality in the Po Valley region could see the population add 1.1 years to their life expectancy.

While Europe has come a long way since the 1990s, other countries have not fared so well.

In parts of Central and West Africa, where outbreaks of diseases like malaria usually dominate headlines, the threat of air pollution “poses just as serious a health threat,” states the report. It found that air pollution reduces global life expectancy by two years.

Coal consumption is also expected to triple over the next two decades in Africa which could pollute the atmosphere even more.

However, Greenstone explains that the success of other areas in waging a “war on pollution” provides hope. “The good news is that there is now a track record of countries deciding to take action and succeeding in cleaning the air.”

The report points to China where three-quarters of the world’s reductions in pollution have taken place since 2013. Chinese citizens are now breathing nearly 40 per cent less polluting particulates and are expected to add two years to their lifespan because of it.

“Though the threat of coronavirus is grave and deserves every bit of the attention it is receiving—perhaps more in some places—embracing the seriousness of air pollution with a similar vigor would allow billions of people around the world to lead longer and healthier lives,” said Greenstone.

“The reality is, no shot in the arm will alleviate air pollution.”