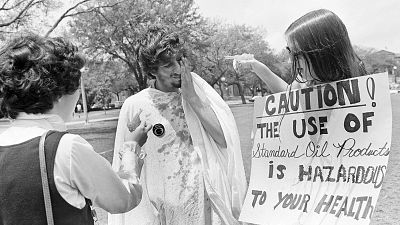 Conceived in a one-room apartment in Washington D.C., US, Earth Day marks its 50th anniversary this year.

In 1970, 20 million people showed up to the first ever event, initiated in response to a catastrophic oil leak in California the previous year. Among the founders of the movement were those that worked to clean up after over 13 and half million litres of oil was spilled into the ocean.

Born from these feelings of frustration and outrage, the organisation says that since then the movement has engaged 1 billion individuals to call for greater protection for our planet. Past successes for the Earth Day Network have seen schools recognised for including environmental education in their curriculum, a campaign established to improve the gender imbalance in policy-shaping organisations and billions of euros of investment for green organisations around the world.

The Earth Day Network states that despite challenges associated with the ongoing coronavirus pandemic, this year is more important than ever as we are reminded of what is at stake in our fight to protect the environment. “If we don’t demand change to transform our planet and meet our climate crisis, our current state will become the new normal,” it claims on the website, “a world where pandemics and extreme weather events span the globe, leaving already marginalized and vulnerable communities even more at risk.“

Many of the network’s partnered organisations have taken their action online, seeking innovative ways for people to collaborate across the globe through digital mobilisation. EARTHRISE will see events on a number of different platforms across the digital landscape in an effort to promote diverse voices in the environmental movement. Earth Day itself will be launching a new action every hour for 24 hours to encourage people to find meaningful ways to help save the planet from home.

In collaboration with partnered organisations around the world, EARTHRISE is encouraging people to take part in digital activism. Many plans for in-person action have been upended by the coronavirus crisis, but by using the “power of the internet” the movement hopes to bring millions of people together.

Video teach-ins, performances from artists and messages from high-profile figures including Pope Francis, Steve Ballmer and Senator Elizabeth Warren will be a part of the Earth Day live stream which will run throughout the day on the organisation’s website. Topics set to be covered include planet-friendly diet changes, activism through street art and a virtual tour of the Indraloka animal sanctuary.

From 9:00 EST (15:00 CET) the digital program will run for 12 hours straight, culminating in a Concert For A Healthy Planet by Grammy Award winning musician and environmentalist Ricky Kej.

A powerful video has been released by climate organisation Fridays for Future. Inspired by founder Greta Thunberg’s 2019 speech at the World Economic Forum, the video is set to open a 24-hour climate change live stream hosted by the group. The live stream will take place on Friday 24th April and feature contributions from young activists in countries around the world.

The Rainforest Alliance held an Earth Day live teach-in earlier this week with their chief programme officer, Nigel Sizer, and Mary Pearl, director of the International Biodiversity Network and dean of Macaulay Honors College of the City University of New York. The discussion was all about what the pandemic could teach us about planetary health.

Pearl explained how modern forms of agriculture have forced humans and other animals to live in much closer contact. This, she said, allows pathogens like COVID-19 to be passed between species more easily. A reduction in the amount of genetic diversity found in an ecosystem through damaging human actions could also increase our susceptibility to global events like this.

“By destroying forests we reduce biodiversity,” she added, “and healthy ecosystems are characterised by a great deal of species diversity. When we lose that what happens is that pathogens can invade.” You can watch the whole discussion on the NGO’s Instagram page.

Check out the video above to see a film debuted by the Earth Day Network to mark the 50th anniversary which is voiced by Irish actor Chris O'Dowd.