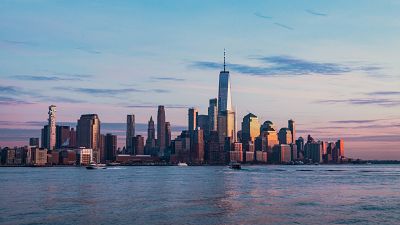 Air quality is improving all over the world in countries under lockdown because of coronavirus. As people stay at home and traffic is cut by over 35 per cent, New York has just joined the list of megacities with a dramatic drop in pollutants found in the air.

Researchers at Columbia University found a sharp reduction: "carbon monoxide levels went to what I consider background clean marine, something on the west coast of Ireland, kind of numbers," Róisín Commane, Assistant professor at Columbia University told the AFP. This is quite astonishing for a city with more than 23 million inhabitants which was ranked the 10th most polluted city in the nation for ozone by the American Lung Association in their 2019 “**State of the Air**” report. According to their results, 50 per cent of New Yorkers were being exposed to unhealthy air.

The latest data from the Copernicus Sentinel-5P satellite shows significant reductions in nitrogen dioxide concentrations over several major cities across Europe – including Paris, Madrid and Rome. NO2 also fell in northern Italy and the European Environment Agency (EEA) found a similar change in Barcelona. India’s megacities are producing unprecedentedly low levels of air pollution too.

Experts, however, say it is far too early to speak of long-term change. As China moves past the peak of its crisis, recent images by the European Space Agency (ESA) show a resurgence in NO2 emissions. "They’ve seen that it has gotten more polluted than it was before the slowdown. So, it would not surprise me if we see a delay in when the peak CO2 emissions are," said Ms Commane.

While poor air quality directly kills an estimated 7 million people each year, it is important to note the health impacts of this temporary change. Stanford University researcher Marshall Burke estimates that tens of thousands of people have already benefitted from the better air quality in China. On the other hand, experts warn to take news cautiously; this is not an analogy for how we want to decrease emissions from climate change. Just think about the record number of Americans, nearly 3.3 million people filing for unemployment in the US this week.

While economic slowdown or recession makes it difficult to move ahead with pending clean energy investments, rising health and financial fears could overshadow the problem of climate change.

"A lot of money is going to be put into getting the economy going again, and if we just put it back into the same polluting industries, people will continue dying,” said Jacqueline Klopp, co-director of the Earth Institute’s Center for Sustainable Urban Development.

She argues for more investment in electric vehicles and renewable energy. “When we’re ready to reconstruct, we should make sure we’re investing in things that can give us a better future.”

Click on the video above to learn more about the current situation.

Air pollution plummets by more than 45% in major European cities

'Climate change is still on, no matter what happens with coronavirus'