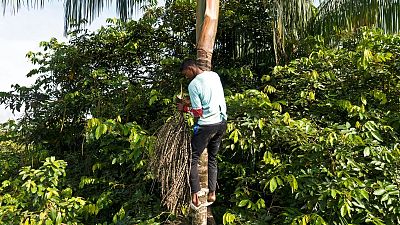 The Amazon rainforest is home to 10 per cent of the world’s species, including more than 40,000 plant species and 24 million people.

Fabio Gondim is one of them. He lives in the community of Bauana (municipality of Carauari) with 138 inhabitants. Manaus, the capital of the state Amazonas, is seven days by boat from there. The 16-year-old travels to school in a nearby community every day, climbs trees in his free time and has already found his true calling, protecting the forest he grew up in.

In the city, "the air is polluted and there is a lot of violence", he says, so instead, he wants to study in the small faculty built by the Sustainable Amazon Foundation (Fundaçao Amazonia Sustentavel) near his community. Fabio's aim is to become a teacher in Bauana.

But the ambitious teenager is not the only one with aspirations. Fabio's neighbour, 22-year-old Kélita do Carmo, also turned her back on the capital after just a few months, to come back to the rainforest and continue her studies. She says she now values the ancestral culture of her community more.

"I also think that here in the forest we have a commitment to pass on the culture that comes from our ancestors. I only have my grandmother who is alive, it's good to hear the stories she tells, I think I have to pass them on to my children, grandchildren" she concludes.

Maria Cunha, 26, lives in another community a few hours by boat from Bauana. Just like her idol, Greta Thunberg, Maria is also working hard to get her message heard in Amazonian communities. "We are the guardians of the forest and we are responsible for its preservation too," she says proudly. A passionate reader and poet, Maria dreams of one day publishing a book about the struggles of the peoples of the Amazonian rainforest.

Protecting the 'Lungs of Earth'

The Amazon absorbs almost 2 billion tons of CO2 per year (the equivalent of 5 per cent of annual global emissions) making it key in the fight against climate change. Despite our best efforts to save it, 15 per cent of the Brazilian Amazon has been destroyed over the past 30 years, according to Greenpeace.

Forest areas the size of entire cities are being cleared in the rainforest every year, while the number of wildfires almost tripled last year compared with the year before.

Why the rainforest is worth more standing

Many young environmental activists, like Maria, who live in the over 580 remote communities that exist there, have their education supported by the Sustainable Amazon Foundation. The Brazil-based non-profit refers to its own work as "making the forest worth more standing than clearing". They engage with indigenous people and tackle serious problems in the communities, such as poverty.

The foundation has set up nine 'Conservation and Sustainability Centres' throughout the Amazon, offering support for environmental education and activities, such as sustainable management of natural resources and community forest management. This way, those in local fisheries or in sustainable tourism can see their family incomes increase, as deforestation decreases.

The strategy is to "take care of people that take care of nature," stated the foundation's General Director Virgilio Viana after having received the 2019 UNESCO-Japan Prize on Education for Sustainable Development (ESD) last year.

Click on the video above to see how Fabio, Kélita and Maria live their lives in the rainforest.