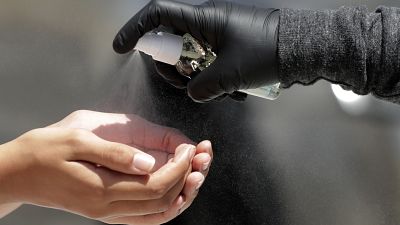 A company that makes carbon-negative vodka from carbon dioxide (CO2) has shifted its entire production to make hand sanitiser in the fight against the spread of COVID-19.

But what is carbon-negative vodka? In 2017, chemical physicist Stafford Sheehan invented a process which uses CO2 to make alcohol. The carbon dioxide is captured from the air and turned into a liquid. Electricity is then passed through a mix of liquid carbon dioxide and other chemicals which turns it into ethanol, the essential ingredient in vodka.

Sheehan showed the process to his friend, now co-founder Greg Constantine, and the pair created a unique brand of the beverage, Air Co., to help fight climate change.

Calculations from the New York based brand show that producing this kind of vodka creates less carbon dioxide than it takes from the atmosphere - this is what they mean by carbon negative. The founders keep emissions low by using solar electricity to power their distillation. No crops of potatoes or grain are needed to create the ethanol either which further reduces the environmental impact.

As bars and restaurants remain closed due to the COVID-19 pandemic lockdown, the distillation of vodka is less of a priority for Air Co. Instead the company is using its carbon trapping technology to produce another product where ethanol is essential, hand sanitiser.

Global shortages of the alcohol-based cleaning product have been prompted by recommendations to help stop the spread of the virus. If every person on the planet had just one small 50ml bottle, over 350 million litres of sanitiser would be needed.

As demand increases, sales have had to be rationed and price gouging has seen hand sanitiser go for incredible prices on sites like Amazon and eBay. This makes it harder for vital health workers and other essential organisations to get their hands on much-needed supplies.

“Sanitizer is 80% ethanol, our technology’s main output, and we will produce as many bottles as we can during this crisis,” Air Co revealed in an Instagram post. Its entire output has been shifted to make products essential to the pandemic and the company is working with officials in New York to donate the sanitiser where it is needed most.

“At Air Co., it's always been our mission to use technology to change the world for the better, by making goods that do good. It’s at the root of everything we do and the reason we make premium products that reduce carbon from the air.”