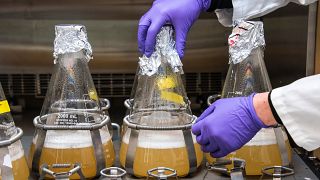 C16 Biosciences is the New York based startup producing a synthetic version of palm oil that doesn’t rely on deforestation. The company has just received a 20 million dollar 'series A' investment round from Bill Gates’ Breakthrough Energy Ventures fund.

The investor-led fund supports cutting edge startups with a focus on environmental innovation and sustainability. Hence, the decision to invest in conflict-free palm oil goes hand in hand with its commitment to back "companies that will help stop climate change." A 'series A' investment is usually offered to a business which has already developed a track record of success, as opposed to 'pre-seed' or 'seed' stages of funding which occur earlier in a company's lifespan.

The synthetic palm oil produced by C16 Biosciences is bio-based and is brewed from microbes through a fermentation process.

Palm oil exists in the majority of household products bought in the supermarket, from frozen pizzas and biscuits to shampoo, toothpaste and lipstick. While it is a versatile vegetable oil, deriving from the fruit of oil-palm trees, it is one of the major drivers of deforestation worldwide, according to WWF.

Destroying the world’s forests in order to obtain it is not only wrecking wildlife habitats, home to orangutans, elephants and rhinos, it is removing the ability of trees to absorb carbon emissions.

For a concerned team at C16 Biosciences, there seemed like no other option but to come up with a sustainable oil alternative to roll out on a large scale. "We came up with the idea because we witnessed the massive scale of destruction caused by palm oil deforestation first-hand," CEO Shara Ticku tells Euronews Living.

"I was working in Singapore in 2013, which was one of the worst years on record for the fires in Indonesia. The Air Quality Index (AQI) was over 400, and over 300 is considered toxic, and pregnant women were restricted from going outside," she continues. Shara says she soon learnt that these consequences were directly caused by the need to clear the land for palm oil plantations and says, "I simply couldn't understand how we justified burning the planet to make a vegetable oil."

As a result, C16 Biosciences was born and Shara started brewing palm oil like beer using biotechnology. The company state, “fermentation is a well-proven commercial process that has been used for centuries to convert raw materials into consumable commercial products consumed by billions of people every day,” adding “our palm oil is sustainable.”

In an official statement, Carmichael Roberts of Breakthrough Energy Ventures, calls the product an "elegant biomanufacturing solution for palm oil replacement" claiming that it puts the company in a good position to capitalise on the “growing need for sustainable, low-carbon bio-substitutes.”

Will the alternatives ever replace the original?

Sustainable palm oil has been criticised of late by The Roundtable on Sustainable Palm Oil (RSPO) as “a con” as there are questions around how the oil can be grown in an environmentally friendly way.

Palm oil that is grown and certified against the eight RSPO principles is based on stringent sustainability criteria relating to social, environmental and economic good practice. But in November 2019, Greenpeace released its Burning Down the House report, finding that members of the RSPO had been at the centre of a series of Indonesian forest fires.

As a result, synthetically produced palm oil might be an improved solution. “Sustainable certification schemes and zero-deforestation commitments from big agribusiness have failed to live up to the hype,” confirms Joe Eisen, Executive Director of the Rainforest Foundation UK.

“Alternatives such as C16 Biosciences can be part of the solution but there are no guarantees this can be a like-for-like replacement for cheap and dirty palm oil from tropical forests. [] Care must also be paid to the possible impacts on millions of smaller-holders for whom palm oil is a main source of livelihood,” he concludes.

Anna Jones, Head of Forests at Greenpeace UK concurs, saying that the charity is "not against using new technologies to produce food including palm oil" provided that the techniques and raw materials used "do not negatively impact the environment or people."