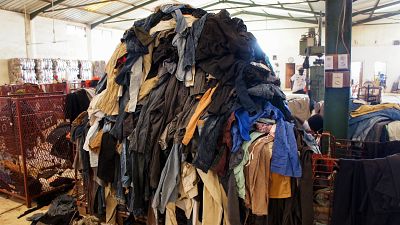 A new study by menswear brand LabFresh found the fashion capital was also capital of fashion waste, seeing the country produce around 465,925 tonnes of textile waste each year, equal to 7.7kg for each of its 60 million people. Of that, just over 10% is recycled while 81.8% of its waste is incinerated or sent to landfill.

Based on a metric of textiles wasted and how they’re disposed of combined with each country’s clothing spend and yearly export of second hand clothes, the formula saw Portugal, Austria and the UK follow Italy as the worst offenders for unsustainable clothing habits.

Meanwhile, the Hungary, Poland, Ireland and France came out as the most sustainable, throwing little away, buying less and giving pre-worn clothes away as hand-me-downs where possible.

Despite less waste in total, Belgium’s smaller population meant it topped the table for fashion waste per person. The average Belgian disposed of 14.8kg of clothes in 2016, according to the Eurostat figures used in LabFresh’s study.

In pure volumes, Finland came out best wasting 14,934kg of clothing. But Spaniards threw out the least per person, at 98,881kg in total and 2.1kg per person. The study found Austrians spent the most on clothes, with the average person in Austria spending around £1080 (€1264) per year.

Rather than being recycled, some waste material is able to be reused without the modification and breakdown associated with recycling. “While 10% of all textile waste stays on the market as second hand clothing, a further 8% can be added back to the production cycle through recycling, as revealed in a report of the European Commission's Institute for Prospective Technological Studies (IPTS),” said Labfresh. “However, the remaining quantity is permanently disposed of.”

The 15 countries in the study disposed of more than two million tonnes of fabrics between them in 2016, with almost a quarter of the total was incinerated – a carbon intensive process. But more 57.1% of all clothes thrown away ended up in landfill, taking up space for years to come and allowing greenhouse gases and chemicals to filter into surrounding air and soil.

Europe’s coolest recycling projects you can invest in