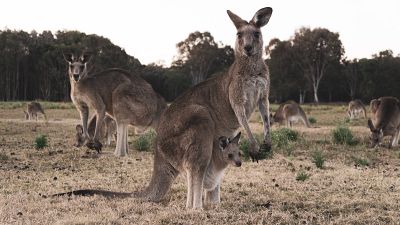 Luxury fashion brand Versace confirms a ban on the use of kangaroo skin in luxury leather products.

Animal rights group LAV had been putting pressure on the fashion house for several years, demanding that they stop using the animal skin altogether. Versace has now confirmed the ban, but did not publicise the news itself in a press release, instead giving LAV permission to make the announcement.

As wildfires continue to blaze in Australia, half a billion animals and plants have now been killed, including an estimated 30,000 koalas. Dozens of volunteers are helping to protect those that have survived, providing veterinary care and food and donating to animal sanctuaries. The environmental disaster prompted LAV to ramp up pressure on Versace to confirm the ban on kangaroo leather going forward.

“The fires in Australia have already killed a billion animals, yet the hunt for kangaroos continues. [] Let's stop the kangaroo massacre before it's too late.”

Senior Vice President at People for the Ethical Treatment of Animals (PETA), Dan Mathews, told Euronews Living, "Good on ya, Versace! Kangaroos are slaughtered by the millions every year, and their skins are often used for football boots and other footwear."

He continued, "these sensitive and intelligent animals are shot by hunters – and orphaned joeys or wounded adults are sometimes decapitated or hit sharply on the head to 'destroy the brain.' It's very encouraging that Versace will leave kangaroos out of its collections, and PETA hopes 2020 will be the year the label follows in the footsteps of other compassionate designers."

Do other fashion labels still use kangaroo skin?

In October, the animal rights group published a report naming and shaming the labels still importing kangaroo skin. This revealed that over 2 million skins were shipped to Italy from 2012 to 2015.

Over 2.3 million kangaroos in Australia are killed each year for commercial purposes overall.

Kangaroo leather is used heavily in the sportswear industry to make trainers and motorcycling suits, but also in fashion accessories and footwear.

In the luxury fashion sector, the two Italian brands called out were Versace and Salvatore Ferragamo. While Versace have now established a ban, the latter seems not to have changed its ways. A quick Google search reveals Salvatore Ferragamo still sells kangaroo skin ballerina pumps online for around £250.

Adidas banned kangaroo skin in 2012 and Chanel, Victoria Beckham and Topshop had all discontinued the use of exotic leather by mid-way through 2019.

What other animal skins are still used in fashion?

While fur is slowly being phased out by fashion houses such as Prada, a more widespread ban on leather has not been popular. Most leather produced is made from the skins of cattle and calves but, according to animal rights organisation PETA, many brands sell products made from sheep, lambs, goats and pigs skin too.

Exotic animals like zebras, kangaroos, elephants, crocodiles, alligators, ostriches, lizards, and snakes are also hunted for their skin in some places around the world.

In 2017, Kering, the parent company of Gucci, Saint Laurent and Balenciaga, invested in a python farm in Thailand. The move was supposed to “ensure the creatures are ethically raised.” Gucci currently have an entire website section dedicated to ‘Exotic Skins’ , featuring crocodile, snakeskin, python and ostrich accessories.

PETA still maintain however, “animals are not ours to wear.”