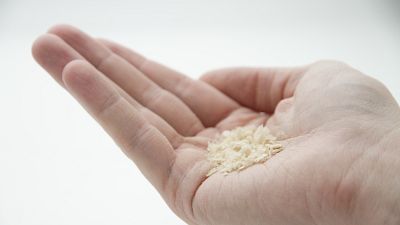 A company in Finland has created a natural protein source using just water, CO2 and renewable energy that could be used to feed lab grown meat.

The innovative protein is created using a method based on a project by NASA to try and create a food source for a Mars mission. It's cutting edge space technology means that it could be used to grow food in even the most extreme of environments. The company, Solar Foods, has collected microbes from Finnish nature and grown them in a fermenter in a process similar to the way wines and beers are made.

Hydrogen and carbon dioxide are bubbled through the microbes as well as the same nutrients taken up by the roots of plants. They eat these nutrients and use the gasses to multiply thickening the liquid in the reactor. This liquid is then removed and dried to create a powder that is 65% protein. Although this process still uses electricity, Solar Foods get this from renewable sources and claim that the process is ten times more efficient than photosynthetic plants.

CEO, Pasi Vainikka, thinks there are several ways that Solien powder could help to reduce the environmental impact of animal agriculture. "Solein can be a protein ingredient in plant based meat alternatives," he explained to Euronews Living, "It can be the protein there, but the texture is by the plant material."

He adds that, as the powder has all the amino acids essential to human diet, it could be used to feed lab grown meat. "You know, when meat is "grown" they still need energy and constituents from somewhere," he says, " We could supply the amino acid part of it and provide disconnection from the agriculture there."

Solar Foods says that, based on a life cycle analysis study, Solein is around 10 times more climate friendly than most plant-based proteins and about 100 times less climate damaging than meat. Compared to other plant based protein, the production process consumes 99% less water and only requires one tenth of the land area.

Agriculture, forestry, and land use contribute 24% of all global greenhouse gas emissions with most of this coming from the cultivation of livestock and crops according to the IPCC. On average, one kilogram of beef creates 45kg of greenhouse gases. Creating protein using microbes could cut these emissions to 8.4 kg as well as reducing the amount of land and water used to feed the world's population according to research by the company.