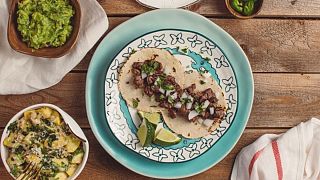 A lot has been said recently about the negative impact of eating too much meat. Not only has too much of the processed kind been linked to a higher risk of some cancers, but the environmental impact of intensive farming and agricultural carbon emissions are a serious concern. However, you don’t necessarily have to turn veggie in order to make a positive difference – instead make more thoughtful choices when buying and cooking meat. Here’s how…

This may be obvious, but buying less meat is one of the best things you can do for both the environment and our health. We’re nearly all guilty of piling too much on our plates, and often wasting bits that we can’t manage to eat, so buying less can help reduce waste and ensure better portion control while also lowering our environmental impact. Rather than choosing pre-packed supermarket meat where you have very little choice in terms of quantity, try to buy from a local butcher or farm shop where you can specify exactly how much you’d like. You’ll reduce your plastic usage this way too.

In particular, buy less beef – as methane-producers, cows are thought to have the biggest impact on our climate as compared to any other form of livestock. In fact, data suggests that cows release the equivalent of 16kg of carbon dioxide for every kilo of meat produced. Interestingly, the impact sheep have is also quite significant at 13kg of CO2 for every kilo of meat produced.

Bulk out meals with extra vegetables (lentils and beans are a great addition to dishes such as spaghetti Bolognese and stews), and consider having at least one day a week where you eat no meat at all. ‘Meaty’ vegetables such as mushrooms and aubergines are great alternatives to use on these days and there are plenty of recipes online for hearty vegetarian dinners. Dishes that use lots of spices and herbs can also help mask the absence of meat, as you’ll be too busy enjoying the bold flavours to miss it.

Related |  How to have a sustainable summer bbq

When buying meat, opt for livestock produced by ethical farmers using smaller-scale methods that promote the welfare of the animal. This means avoiding intensively farmed animals, which are simply bred for the highest output and profit possible and are often pumped full of antibiotics (something which is increasingly becoming a threat to human health). Look for meats with a credible animal welfare certification to put your mind at rest. Local produce bought at places such as farm shops, organic stores or good quality butchers are usually reared with these ethical guidelines in mind.

Many animals reared for their meat are fed on plant proteins that are grown specifically for this purpose and imported. Sadly, huge swathes of land in countries such as Brazil and Paraguay have been impacted by this – with forests being cut down and communities moved to make way for crops. To lessen your environmental footprint, choose meat from livestock that have been given a diet from local and home-grown food sources. This cuts down the environmental impact of transporting feed. Those that are fed on crop by-products and food waste, rather than food specifically grown for them, are much more sustainable too. Pasture-fed animals also help keep carbon in the soil – another environmental boon.

Use every part of the meat

Waste less by using every part of the produce you buy – carcass and all. Food wastage is a huge problem and it’s believed that across the world households are throwing away around 570,000 tonnes of fresh meat each year (according to the book Farmageddon, that’s the equivalent of 50 million chickens, 1.5 million pigs and 100,000 cows – an unbelievably high amount).

Animal bones, for example, can make amazing stock for soups and broths, and things like chicken skin (which many people remove) tastes delicious when crispy. Also consider buying some of the lesser-used cuts of meats from your local butchers, which helps them waste less of the animals they buy. Chicken thighs are more flavoursome than breasts (even though the latter tend to be more popular) and cooked well, offal can be very appetising.

Don’t forget to use your freezer too – you can freeze leftover portions of home-cooked meals, or even half a pack of mince or an odd chicken breast if you don’t think you’ll need it all immediately. Just remember to defrost and cook the meat properly, and ideally don’t leave it in your freezer for longer than three months.