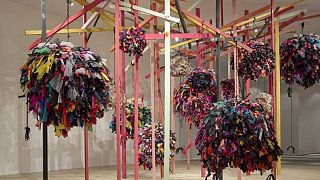 From 27th June - 3rd July, over 150 international exhibitors gathered for the 10th edition of Masterpiece London at the Royal Hospital Chelsea. We went along to glimpse the impressive display of exquisite works of art, furniture, jewellery for sale and design. Making our way up the red carpet at the entrance, it became clear that Masterpiece London was a spectacle that would not disappoint. Perrier-Jouët’s iconic champagne was flowing, and the whole atmosphere simply wreaked sophistication. When it came to food, the range on offer was just as opulent, including restaurants like Le Caprice, The Ivy, Scott’s and The Sloane Street Deli, posing an array of lobsters, oysters and champagne.

As I explored the Art Fair, taking in the ambience, my eagle eye was on the hunt for artwork that boasted sustainable credentials. Three artists stood out for being environmentally conscious in their work, and trust me, each one is well worth reading about.

The first thing I set eyes on at the Art Fair was Phyllida Barlow’s colourful, suspending sculpture. The renowned artist had created a special installation for Masterpiece London, by returning to the ‘pom-pom’ sculptures she first made in the 1990s. This installation was in line with the idea that Barlow’s work is usually abstract, or semi-abstract, and showcased brightly coloured fabric and plaster pom-poms being suspended from varying heights. The whole point was to encourage gallery attendees to interact with the artwork rather than simply viewing it. What was impressive was that she utilised readily available materials such as cardboard, cement and plaster, polystyrene, timber and paint in her work. In fact, Barlow began her career by dismantling sculptures and recycling the materials in one piece for use in another.

Chris Jones’ work could not help but intrigue me, with its individuality and inspiring use of recycling. The three notable pieces of artwork included ‘Between the Dream and the Void’ ,‘The First Day of Forever’ and ‘Field Guide’ and also exhibited Jones’ lifelong commitment to scavenging - through travel magazines, books and encyclopaedias, where he found images suitable for collage.

Allegedly, in the artist’s studio are stacks of boxes filled with recycled collage images, all labelled with different themes such as ‘woodland’ and ‘windows’. Jones’ motorbike sculpture, named ‘Between the Dream and the Void’ illustrates the idea that the images are given a second life and travel with the motorbike on another journey. I especially enjoyed ‘Field Guide’, an amalgamation of images of natural landscape, that were repurposed to form a new nature scene.

Sir Anthony Caro, widely regarded as the greatest British Sculptor of his generation

The final collection of artwork I was struck by was created by the internationally acclaimed Sir Anthony Caro and was exhibited by Blain | Southern. The artist’s monumental work, produced over a time span of 40 years, was being exhibited to celebrate his collaboration with the National Trust at Cliveden. At Masterpiece London, he displayed eye-catching sculptures that were created by repurposing discarded objects, notably scrap metal. The work was architectural in style, and offered fresh perspectives of Cliveden’s famous gardens. Sir Anthony Caro has played a pivotal role in the development of twentieth-century sculpture and it was a privilege to see his work in the flesh.