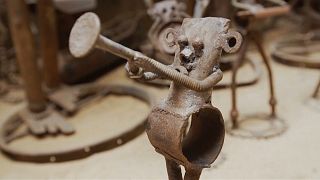 Meissa Fall from Saint Louis, Senegal, has had a passion for bicycles since he was a boy.

The 55-year old began by following in his father's footsteps - repairing bicycles and motorbikes. But even as a child he could see shapes coming out of the bikes that his father made him clean over and over again after they had been fixed.

Fall used to ride motorbikes as a youth, tearing through the narrow streets of Saint Louis, an old colonial city on the northwest coast of Senegal, whose central architecture is protected by UNESCO.

For Meissa, turning old bikes into art is an ode to the millions of revolutions of the bike's wheels on the tarmac and dirt roads of the colonial city, a homage to the cycle of life and a legacy he hopes will continue to flow through his children.