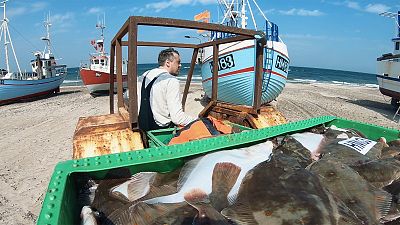 Small, independent fisheries are slowly making their return after almost being wiped out by Denmark's decision to privatise fishing quotas a decade ago, which allowed big companies to assert their dominance in the fishing market.

The EU’s Common Fisheries Policy leaves it up to member states to decide how to allocate its national fishing quota to its fishing fleet.

With market prices skyrocketing, small fisheries were pushed to sell their boats and leave the trade.

Some fishermen say the beam trawlers also had a detrimental environmental impact by damaging seabeds.

Fishermen in the North Western town of Thorupstrand decided it was time to take action to ensure their town, and other fishing villages weren't wiped off the map by the quota system.

Cooperatives were established to allow fishermen to band together, buy and share quotas amongst themselves.

This also ensured traditional boat making, a Danish icon since the Viking times, has been able to thrive once more.

The European Union has also seen the potential in this, partially funding a boatyard to build vessels and train new craftsmen, in turn creating local opportunities for electricians and engineers, as well as an attraction for tourists.

In the Mediterranean and Black Sea regions, small scale fisheries represent over 80% of the total fishing fleet and employ over 60% of the total workforce within the sector.

Catch of the day

With sustainable seafood a growing food trend, Thorupstrand has set up shop in one of the world's culinary capitals.

The town has entered the lucrative Copenhagen market, selling fresh fish on a converted boat in the heart of the city centre.

Activists are raising funds to save Danish wooden boats