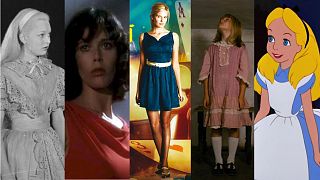 This Saturday (14 January), we commemorate the death of Charles Lutwidge Dodgson, better known as Lewis Carroll.

It’s been 125 years since the passing of the English author, poet and mathematician, who is best know for his works 'Alice’s Adventures in Wonderland' (1865) and 'Through the Looking-Glass' (1871).

We all know the Disney version (probably the most timeless iteration of the original book) and the countless American adaptations – the last two of which were Tim Burton’s middling 2010 effort Alice in Wonderland and its dire 2016 sequel Alice Through the Looking Glass … But what about the European counterparts?

Join us while we go down the rabbit hole and explore the European feature film adaptations of Carrol’s masterpieces, guiding you through the lesser known titles that are essential viewing for any fan of Carroll and his unique works.

The first movie adaptation of 'Alice in Wonderland' was the silent short by Cecil Hepworth and Percy Stow, with May Clark as Alice. Only one copy of the original film is known to exist and the British Film Institute (BFI) partially restored the movie and released it in 2010.

While the first full-length British version of 'Alice in Wonderland', directed by George More O’Ferrall and starring Vivian Pickles as Alice, was released in 1946 and is more watchable (and significantly less damaged than the 1903 version), Alice in Wonderland is still worth your time as a piece of cinematic history.

Made just 37 years after Lewis Carroll wrote his novel and eight years after the birth of cinema, it is particularly memorable for its use of special effects, including Alice's shrinking in the Hall of Many Doors. It was the longest film produced in England at that time.

You can find it on YouTube – and we’ve handily embedded the film below:

Set in Victorian England, the film is not a direct adaptation per se, as the story follows author Charles Dodgson and frames the 'Alice in Wonderland' narrative around Carroll’s life.

The film had a troubled release. It wasn’t screened in Britain until 1985, allegedly because Carroll's representation of the Queen of Hearts (played in 1949 by Pamela Brown) was seen as too unkind to Queen Victoria. Additionally, Disney sued to prevent the film’s release in the US, as Disney Studios was making its own full-length animated version of Alice at the same time.

There was some justice for this 1949 version however, when the Museum of Modern Art restored the film on a 35mm print in a rare 2009 screening.

Alice ou la dernière fugue (Alice or the Last Escapade) by celebrated director Claude Chabrol is loosely inspired by Carroll’s novel. It sees Alice Carroll (see what they did there?) played by Sylvia Kristel leave her husband who she now loathes.

When her car windshield mysteriously cracks, she is invited to stay in a creepy-looking manor by an old man and his butler. She accepts (as you do) and when she wakes up in the morning, her car is fixed but the men are nowhere to be found. Bizarre, but she has her breakfast (which was already perfectly laid out for her) and tries to leave. Distressingly, she soon realizes that there are no entrances or exits, and that she’s trapped in some sort of in limbo that defies the very indispensability of life.

Chabrol crafts a Hitchcockian atmosphere, a movie with strong echoes of a Hammer horror classic, and frequently injects some expressionism in his parallel dimension sets, depicting the good and evil duality through lighting and his visuals. It’s a subtly terrifying film that cleverly toys with Carroll’s lore.

It’s not one of Chabrol’s most celebrated films, but it’s really quite unique and well worth your time.

Alicja is a strange musical-fantasy film co-produced by Belgian and Polish film companies, and directed by Jacek Bromski and Jerzy Gruza. It sees Sophie Barjac (in the title role) fall in love with a jogger named Rabbit, played by Jean-Pierre Cassel (father of Vincent). The snag is that Queenie has hired a pair of snipers to kill Rabbit…

We won’t spoil the frankly batshit developments and sheer amount of musical numbers, even if this film is particularly hard to find. You’re not missing out on that much, but it is worth mentioning that the solid score by Henri Seroka had Scottish singer Lulu dubbing Barjac’s vocals.

For anyone who’s a Lulu fan out there and still thinks that her Eurovision winning song ‘Boom Bang-a-Bang’ is a solid gold hit, this could be a curio worth seeking out.

This British drama written by Dennis Potter and directed by Gavin Millar, is a fictionalised account of Alice Liddell, the child who inspired Lewis Carroll's 1865 novel.

The story is told from the point of view of 80-year-old Alice (Coral Browne) as she travels to the United States from England to receive an honorary degree from Columbia University celebrating the centenary of Carroll's birth. As a child, Alice had a close friendship with the writer, who she knew as Rev. Charles Dodgson (Ian Holm). She revisits her memories of Victorian-era Oxford (with the young Alice played by the excellent Amelia Shankley) and attempts to come to peace with her conflicted childhood and the complexity of the bond she shared with Dodgson.

Dreamland is an underappreciated film whose manner of invoking the multifaceted nature of love is subtly bewitching.

Plus, it has creature effects created by Jim Henson's Creature Shop (always a massive draw) and Alan Bennett and Julie Walters respectively provide the voices for the Mock Turtle and the Dormouse. What more do you need?

This singular and surrealistic revision of 'Alice in Wonderland' by Jan Švankmajer is the absolute gem in this selection… Provided you have an affinity for the twisted and the nightmarish.

It’s an 88-minute long stop-motion fever dream that sees one live actor, Kristýna Kohoutová playing Alice, going through her adventure with stop-motion animated creatures – mostly household objects, taxidermy animals and inherently creepy figures made up of bones – all voiced by the young girl.

It’s less a fairytale and more a darker reimagining from someone who has a clear affection for the source material and its unsettling undertones. This is reflected in the use of colours – gone are the frequent kaleidoscopic hues used in other adaptations; they are replaced by brooding browns and gloomy grays.

As for the haunting ending, which shows a bored and lonely girl trying to entertain herself, there are sinister interpretations to mull over regarding what this Alice is capable of.

Nothing shall be spoiled further but make sure to seek this one out.

From the creepily sublime to the ridiculous…

This wonderfully-titled adaptation, written by Jayson Rothwell and directed by Simon Fellows, takes place in the underbelly of modern-day London. It follows a university student (Maggie Grace) who, after getting hit by a taxi, awakes in the surreal and grimy Wonderland, with no memories left. She needs to find out who she is, where she is from, and use what wits she has left to get back home.

The majority of the original characters are represented, but they’re given seedy makeovers to match the underworld. For example, the White Rabbit is portrayed as a cockney cab driver played by Danny Dyer.

That should tell you all you need to know.

Indeed, this modern twist on a classic tale is admirable in its intentions to deliver a singular vision of Carroll’s tale but it’s ultimately rubbish.

Shame. The title was so damn promising. But thankfully, the next offering from the UK fares much better…

Indie director Navin Dev’s first feature film is another sinister take on 'Alice in Wonderland', but unlike Malice in Wonderland, Red Kingdom Rising succeeds in creating something meaningful that goes beyond darkness for darkness’ sake.

We follow Mary Ann (Emily Stride) as a troubled young schoolteacher who has to come to terms with her past. Following the death of her father, she returns to her gothic family home where she recalls the childhood stories of the Red King that her father once read to her.

Without spoiling a few key details, she soon finds herself in a morbid kingdom that Clive Barker would have approved of, guided by a Cheshire Cat-masked girl who calls herself Alice in her quest to face the embodiment of her childhood fears.

While Red Kingdom Rising is no masterpiece by any stretch of the imagination, it benefits from a focused vision: Dev was inspired by real accounts of adult survivors of child abuse, as well as Bruno Bettelheim's seminal work 'The Uses of Enchantment: The Meaning and Importance of Fairy Tales', and delves into the emergence of suppressed memories - specifically how a person can gain closure through confronting trauma.

It’s far from perfect but significantly more thought-provoking than many other depictions of 'Alice in Wonderland'. It also understands that Carroll’s unique tale does not need a happy ending or to convey an uplifting message in order to work.