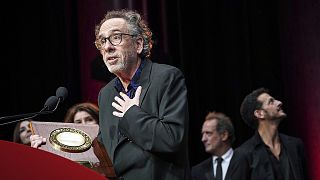 Director Tim Burton delivers a speech after receiving his award during the Lumiere Award ceremony of the 14th Lumiere Festival in Lyon, 21 October 2022   -   Copyright  AP Photo/Laurent Cipriani
By Euronews  •  Updated: 23/10/2022

In front of an applauding crowd of thousands in Lyon, world-renowned American film director Tim Burton was recognized for his 35-year-long career in the birthplace of cinema.

“In all my life, I've never received so much love," he said while wiping away tears as he received the Lumière lifetime achievement award in the French city.

"It is such an honour to be honoured in the cradle of cinema ... And so, I'm kind of speechless, but thank you so much. I will never forget this."

The Lumière Institute created the award in 2009, which has since become one of France's most prestigious film awards.

Burton is best known for his fascination with Gothic fantasy and horror. And he was the mastermind behind beloved cult classics such as Edward Scissorhands and Nightmare Before Christmas.

Fans queued outside the ceremony to get a glimpse of the filmmaker.

Anaïs Gouny Gomez, one of the people at the ceremony, said, "Tim Burton likes to show monsters, likes to show things that are considered scary or repulsive to society.

"But he shows their sensitivity and their beauty. That's something that I really like in his films."

Lolita Waltrigny, a student and another fan at the event, said that his work is like poetry “that is completely his own, and he really has a body of work that is very particular."

"You can see that he puts his heart behind it ... You can feel all his feelings inside," she said.

Burton’s last film was the Disney film Dumbo, released in 2019. But he later said it would probably be his last film with the studio.

"I realised that I was like Dumbo, working in a big circus that I needed to escape from," he said.

He is now transitioning to the small screen for an adaptation of The Addams Family called Wednesday, the name of the somewhat evil but lovable daughter in the original series.

All eyes on Lyon as 2022 Lumière Film Festival begins