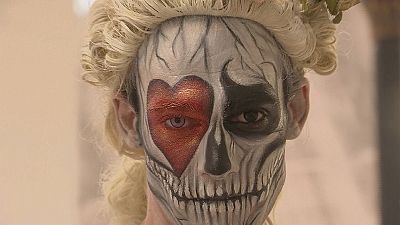 One hundred and fifty years on, Lewis Carrol’s Alice in Wonderland continues to inspire.

As soon as I read about this great anniversary of Lewis Carroll I thought, great, we'll go for Alice in Wonderland because the designs are unique to the book, but the artists can play with it as well.

This time it’s at the Olympia Beauty trade show in London, where make-up artists are using models’ bodies as their canvas.

Alice and her adventures with the White Rabbit and the Mad Hatter are just some of the designs being featured in the live exhibit entitled the ‘Art of the Body Painting’.

Suzanna Forrister-Beer, body artist: “I decided to take the start of the film (based on the book) where Alice is in search of Wonderland and her falling down the hole, so the whole theme is about falling, and about the distortion which continues throughout the film as well as the key which is the integral part that she’s searching for. So she’s going to be coming out of the keyhole.”

The aim of the art is to trick the observer into believing the model is wearing a costume. It’s about colour and artistry rather than the body itself. The artists use the shape of the body to interpret both scenes and characters.

Julia Townend, make up artist: “As soon as I read about this great anniversary of Lewis Carroll I thought, great, we’ll go for Alice in Wonderland because the designs are unique to the book, but the artists can play with it as well. Some of them are going for Alice, some of them are going for the Queen because she’s quite a strong queen. There is a White Queen, somebody is doing a White Queen here, so they’ve picked some really good characters.”

Imagination is the key.

And while it takes hours to paint a model like this, it’s all temporary. The watercolours are non-toxic, non-allergenic and can be easily be washed away.