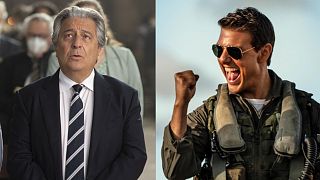 A French person looking at the box office for 2022 could legitimately exclaim: Merde, alors!

Yes, something has gone very wrong somewhere because for the first time since 1989, there isn’t a French film to be found in the country’s biggest top 10 box office earners.

The rest of the Top 10 is as follows: Doctor Strange in the Multiverse of Madness, Jurassic World: Dominion, Minions: The Rise of Gru, Spider-Man: No Way Home, Thor: Love and Thunder, The Batman and Fantastic Beasts: The Secrets of Dumbledore.

The highest-grossing French film, Serial (Bad) Weddings 3, (Qu'est-ce qu'on a tous fait au Bon Dieu?) which underperformed and came in 12th among the year’s releases with a total gross of $17.5 million (€16.3 million).

The next French entries are Simone: A Woman of The Century (Simone, le voyage du siècle) ($17 million - €15.8 million), the Simone Veil biopic about the Auschwitz survivor who became health minister of France and championed the 1975 law that legalised abortion in France.

Next is Cedric Jimenez’s November ($16.8 million - €15.6 million) a counter-terrorism thriller starring Jean Dujardin set in the aftermath of the Paris attacks in 2015.

Reasons to be hopeful

What we learn from this is that the French box office was almost exclusively dominated by US studio movies, and that blockbusters have a lunatic reliance on colons - eight out of the top 10 in the 2022 chart (over)use the punctuation.

Beyond grammar, the French box office is still not back to its pre-pandemic levels, down 28% on 2019.

After two sluggish years due to the pandemic, French cinemas have recovered a large part of their audience in 2022. Admittedly, they are far from the 200 million annual admissions that France has been exceeding since 2014. But with 152 million tickets sold in 2022, according to the CNC (Centre national du cinéma et de l'image animée), there are encouraging signals.

French cinemas have recovered three quarters of their pre-Covid attendance, with an increase of 59.2% compared to 2021. However, this result is 26.9% lower than in the pre-Covid period, due to the fact that theatres were shut for more than 5 months in 2021.

The result in France is notably better than most countries with comparable markets.

Comscore France, an audience analysis company, said that the French box office was impacted by the threat of COVID variants, the rescheduling of several anticipated releases during the first months of 2022 as well as audience fatigue.

In 2022, "the entire audience returned to theatres, but was more selective," Eric Marti, a specialist at Comscore, told AFP. American films were a "driving force" when, on the French side, only films "with a certain originality" resisted, to the detriment of big French comedies.

Several anticipated titles could prop up French box office numbers in 2023, including the recently released Tirailleurs (Father and Soldier) with Omar Sy; the fifth instalment in the Asterix series, Astérix et Obélix: l'Empire du Milieu (Asterix & Obelix: The Middle Kingdom) (out on 1 February) and The Three Musketeers: D’Artagnan, starring François Civil, Vincent Cassel, Eva Green and Vicky Krieps, which comes out on 5 April, followed by its sequel on 13 December.

What were the 10 biggest movies of 2022 at the global box office?