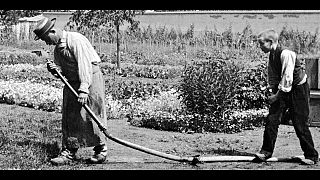 28 December 1895: Louis and Auguste Lumiere screen a series of short scenes at the Salon Indien du Grand Cafe in Paris for their first paying audience.

The Lumière brothers were French manufacturers of photography equipment, best known for their Cinématographe motion picture system and the short films they produced between 1895 and 1905.

While they screened the famous La Sortie de l'usine Lumière à Lyon (Workers Leaving the Lumière Factory) for around 200 members of the "Society for the Development of the National Industry" on 22 March 1895 in Paris, their first commercial public screening on 28 December 1895 for around 40 paying visitors has traditionally been regarded as the birth of cinema.

The presentation consisted of 10 short films, lasting 45-50 seconds each, including La Sortie de l'usine Lumière à Lyon and Le Jardinier (l'Arroseur Arrosé) (The Sprinkler Sprinkled), which is the earliest known instance of film comedy and the first use of a promotional film poster (see above).

Here it is in all its slapstick glory:

There was a second version of this short film in 1896, which replaces the boy with a teenager and the spanking is replaced by a kick.

While the Lumière brothers were the first to screen a film,  several others pipped them to the post when it comes to commercial public screenings. Earlier commercial screenings were held by Woodville Latham and Eugene Augustin Lauste with their Eidoloscope on 20 May 1895, and by Max Skladanowsky and his brother Emil with the Bioscop in Berlin on 1 November 1895.

In collaboration with others at Marvel - particularly Jack Kirby and Steve Ditko - he co-created iconic characters like Spider-Man, the X-Men, Iron Man, Thor, the Hulk, the Fantastic Four and Black Panther.

1974: Tom Baker made his first full appearance as the Fourth Doctor on Doctor Who, in the episode ‘Robot - Part One.'

He appeared in 172 episodes over a seven-year period, from 1974 to 1981. This makes him, to date, the longest-running on-screen Doctor of the series. And the one with the best scarves.