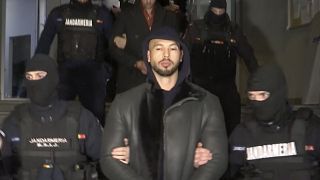 Controversial online personality Andrew Tate has been arrested in Romania in connection with rape and human trafficking charges.

Tate was detained with his brother, Tristan, and his home in Bucharest was raided by police.

The pair’s names were not released by the Romanian authorities who said only that two British nationals had been arrested alongside two Romanians. However, a lawyer for the brothers later confirmed their detention.

"The four suspects appear to have created an organised crime group with the purpose of recruiting, housing and exploiting women by forcing them to create pornographic content meant to be seen on specialised websites for a cost," prosecutors said about the group.

Romania's Directorate for Investigating Organised Crime and Terrorism (DIICOT) said that six victims had been identified, who they said had been recruited by British nationals who had pretended to want a relationship with the women before forcing them to perform in pornographic material.

Investigations have been ongoing since April when Tate’s house was raided after a tip-off that an American woman was being held there against her will.

Who is Andrew Tate?

Tate was originally known as an international kickboxer but he gained notoriety in 2016 when he was removed from the UK reality TV show Big Brother.

The controversy was related to a video which appeared to show him attacking a woman with a belt. The video was later described as consensual by both parties.

In the following years, Tate began to make a name for himself by associating with far-right figures in the UK and beyond, such as politician Nigel Farage, activist and convicted criminal Stephen Yaxley-Lennon (also known as Tommy Robinson) and conspiracy theorist Alex Jones.

However, it wasn’t until this year that Tate gained the widespread fame he enjoys now.

In August, the ‘influencer’ had amassed over 11 billion views for his videos on TikTok where the self-styled self-help guru said women belong in the home and shouldn’t be allowed to drive. Tate also acted out violent punishments for women who transgressed against him and described destroying their belongings.

He was eventually banned from Twitter for saying that women who suffer sexual assault must bear “some responsibility”. He was later reinstated by Elon Musk.

Tate has lived in Romania for five years, leaving the UK amid abuse allegations by police. He gave "being able to evade rape allegations" as a reason for the move.

“I’m not a rapist, but I like the idea of just being able to do what I want. I like being free,” Tate said.

Did Greta Thunberg have a hand in Andrew Tate’s arrest?

Rumours have circulated since news of Tate’s arrest, whisperings that a helping hand may have come from an unlikely source: climate activist Greta Thunberg.

“Hello @GretaThunberg. I have 33 cars. My Bugatti has a w16 8.0L quad turbo. My TWO Ferrari 812 competizione have 6.5L v12s. This is just the start. Please provide your email address so I can send a complete list of my car collection and their respective enormous emissions.”

yes, please do enlighten me. email me at smalldickenergy@getalife.com https://t.co/V8geeVvEvg

“Yes, please do enlighten me. email me at smalldickenergy@getalife.com”

In response to the activist’s comments, Tate posted a video in which he was handed a pizza box from a local restaurant, supposedly tipping off authorities he was in Romania. This has not been confirmed.

Following his arrest, Thunberg baited him further by saying: “This is what happens when you don’t recycle your pizza boxes.”

Kind hearts and cor! What a chest! Meet the new wave male influencers

‘Influencer only’ airline launches with juice bar and free massages