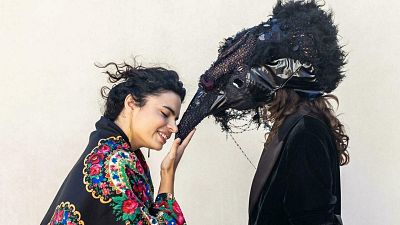 Actor and playwright Alina Serban has become the first Roma woman to direct a play on Romania's national stage at the Bucharest National Theatre.

Her autobiographical performance, 'The Best Child in the World', tells the story of a young Roma girl struggling with self-identity and racism.

"This is the first time that a Roma story, written, staged and performed by a Roma artist, has been welcomed by a Romanian national scene," she says.

She hopes her play – which has been sold out since 21 January – will help others in her community feel represented and heard.

Admitted to the very selective Academy of Theater and Cinema in Bucharest, Serban took her talents to New York and London.

Quickly, she drew recognition for her film roles in 'Gipsy Queen' – for which she won Best Actress Award at the German Actors Guild Awards 2020 – and the Belgian drama 'Alone At My Wedding'.

To her, recognition and international awards "are not enough" and she seeks to create art that draws on the first hand discrimination she received for identifying as Romani from an early age.

At school, she heard a line that has haunted her forever: "She's not Romanian, she's a Gypsy".

"The problem with racism is that all the hate that you feel is targeting you becomes self-hate," reveals the playwright.

Romania, one of the poorest countries in the EU, has the largest Roma minority in Europe, numbering around two million people.

However, officially they make up only 621,000 out of a population of 19 million, because many are reluctant to identify as Romani due to fear of discrimination.

According to opinion polls published in 2018 and 2020, seven out of ten Romanians say they "do not trust the Roma".

However, the bubbling artist brandishes her identity loud and clear in front of the public at the National Theater in Bucharest.

International Romani Day 2022 is being celebrated on 8 April, and aims to raise awareness of the issue facing Romani people.

The actress sees sees reasons for hope. She believes the younger generation are more open to diversity, and interested in the music and fashion of the Roma people.

Progress is also seen at school: "there is beginning to be an awareness" of what the Roma have endured, believes sociologist Adrian Furtuna, who cites the introduction for the first time in textbooks of a story about slavery.

"If I continue, it's because at the end of the films or plays in which I play, I see a gleam in the eyes of the spectators," she says.

"I am convinced that I can change the world with the stories I tell."

Check out the video above to Alina performing on one of Romania's biggest national stages.