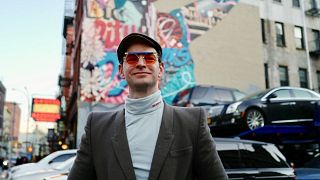 Brad Podray is angry at the internet.

The videos Podray gets his pseudonym from, his Scumbag Dad series, give a first-person view of a child with the world’s worst father. Under the guise of family days out, the Scumbag Dad, played by Podray, has his kid as the accomplice for drug deals, human trafficking and murder.

“I see people who have little or no creative skills, and they're willing to lie and gain large platforms of their dishonest content,” Podray says.

Podray rankles at the lack of work other creators put into copycat content that’s sole motivation is to drive views and potential profits. Aware he shouldn’t look a gift horse in the mouth, he’s committing to the same kind of mindless content.

Seeing how little work people put into reaction vids - videos where people superimpose themselves reacting over someone else’s content - Podray has started trying out his own reaction vids.

“I'm a little bit too stupid to do that though,” Podray says.

To explain, Podray’s attempt at a reaction vid is to satirise the metaphysics of the premise. He’ll film himself reacting to a video. But it’s not a video; it’s happening live right beside him and is being filmed by a second camera. Then the “original” video will catch on and Podray and the other creator will get in a fight. All filmed by a third camera.

Sound confusing? It makes more sense in motion and speaks to Podray’s indefatigable approach to creativity.

Even when he’s criticising someone else’s lazy content, anything with fewer than three cameras, a metanarrative, and sudden inexplicable violence simply won’t do.

But this is just the beginning of Podray’s world of satire.

Another style of video he likes to parody is the ‘Rich Vs. Really Rich’ series. In these videos, a rich man is typically found being rude to someone in customer service, only for a very wealthy man to upstage him with his kindness.

“Whenever somebody creates a trend or series like this, what they're doing is they're creating their own world where, for example, every day the rich guy you know, gets insulted by the really rich guy because he doesn't understand kindness,” Podray says.

“I tried to explore, like, what are other elements of this trend like this world,” he adds.

While the original makers of these series keep to their scripts, Podray diverts. In recent versions of his Rich Vs. Really Rich skits, he starts having his Rich character question the very reality he exists in.

“Have we done this before?” We’re in a Rich Vs. Really Rich person simulation,” Podray asks himself in one video.

Going through Podray’s feeds, there’s almost countless examples of him taking different internet trends and finding ways to deconstruct them.

Have any original creators got annoyed with him for doing so?

“We have had contact at this point. I'll leave it at that,” Podray says when I ask him about Nicholas Crown, the original creator of the Rich Vs. Really Rich series.

What frustrates Podray the most are the trends that turn acts of kindness into a commercial act, or lies to viewers to sell a product.

“A lot of the online population are fairly young and fairly impressionable,” he says. “I really have a lot of distaste for all of the easy saccharin content that gets pushed out on YouTube. I hate the idea that morality must be rewarded.”

Podray points to videos where creators ask strangers for money and then rewards these strangers with huge amounts of cash.

“On the surface level, it’s a nice story because they were charitable and rewarded. But they're forgetting that that’s the exception of that situation. In a way it’s poor shaming.”

To satirise these kinds of videos, Podray has made equivalents with his signature dark twists. In one, the charitable person isn’t rewarded with money but a used needle. In another, Podray poses as a homeless man who’s available to be used in other people’s TikTok videos for clout.

Podray showed just how easy it is to create manipulative content with an experiment he conducted at Drake University. Parodying charitable videos of people going up to strangers and offering them money or the option to double the amount and offer it to the next person, he enlisted students to participate in a fake version of the video.

He claimed to the students that despite the video being almost obviously staged, it would rack up views. He was right. The video got more than 3 million views on TikTok.

The real dad behind Scumbag Dad

Using his humour to deconstruct trends isn’t where Podray expected to be in life. By almost any measure, he’s not a typical internet influencer.

In his forties, Podray lives in Iowa with his wife Hannah and young child and works full time as an orthodontist. His career in comedy started out when he formed the pirate rap group Captain Dan & the Scurvy Crew with his childhood best friend.

After a few years of incremental success with the band, the band went on America’s Got Talent. It was seeing how staged and manipulative reality TV was that Podray initially began questioning the industry. A botched attempt to get on Masterchef followed and Podray was now committed to his career in comedy and music.

He’s since released around 40 albums and his videos have scored millions of hits. And while he’s gaining more and more followers through his parodies, it’s not where his heart really lies.

The true core of what Podray is about is his Scumbag Dad series. For years, he’s worked on a long narrative for Scumbag Dad as his actions slowly wear off on his once innocent child.

But before he could complete the narrative arc he’d vaguely planned out for the Scumbag Dad character, his content started getting banned from platforms and his channels demonetised.

“I was really building towards a message and I wasn't able to accomplish that,” Podray laments. “I started to get banned all the time. So I had to nerf the series.”

Any use of blood or violence would get a video taken down. Drug references had to be completely oblique not to have his content removed. Podray realised the platforms that he’d grown his fame through were no longer willing to accommodate his dark creativity.

Using multiple locations, complex storylines and a large acting ensemble, the Scumbag Dad series was by far Podray’s most involved series. It’s the one he loved the most too, relishing in the opportunity to film ridiculous plots with his friends.

He still creates Scumbag Dad videos, but they no longer feature as part of a longer story in the same way. It’s Podray’s passion project, but for the moment making his version of “easy” content is what gets the views. It’s Podray’s own Scumbag Dad origin story.

Kind hearts and cor! What a chest! Meet the new wave male influencers