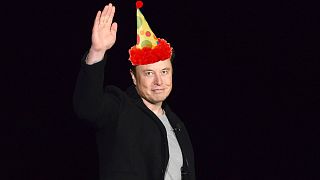 Billionaire Elon Musk, who bought Twitter earlier this year.   -   Copyright  AP/ Miguel Roberts
The opinions expressed in this article are those of the author and do not represent in any way the editorial position of Euronews.
By Amber Bryce  •  Updated: 30/12/2022

Our daily Cultural Advent Calendar is nearly over. For the past week, we've been sharing our Highs & Lows of 2022. Today: A definite low, with Elon Musk and his Twitter takeover.

I first signed up to Twitter one night in 2009. I couldn’t sleep, probably worrying about failing my driving test for a third time, and heard it mentioned on the Adam and Joe comedy podcast.

I set a floral background for my profile (yes, you could do that!) and Tweeted what felt like very poetic thoughts about school and friendships and boys named Ben.

It’s all a bit embarrassing to look back on, but at the time Twitter was such a new - and weirdly peaceful - space. I used it like a diary. My Tweets maybe got a few replies from my best friend, but they mostly floated off without any engagement, or consequence.

Those halcyon days of old Twitter seem all the more unbelievable when contrasted with the hellscape that is new, Elon Musk-owned Twitter.

After a lengthy and tumultuous $44billion acquisition, Musk was handed the keys to Twitter HQ in October, marking his first day as ‘Chief Twit’ by sharing a video of himself carrying a kitchen sink, captioned “Let that sink in!”

In many ways, it was the perfect introduction to the “real” Elon; less Tony Stark, more cringe-boomer-dad-attempting-reddit-snark.

Since then, the billionaire has made near-daily headlines with bad decision after bad decision. It started with him firing the entire Twitter board and making himself sole director, shortly followed by the mass layoffs of around 50 per cent of staff, while many more later resigned after receiving an email ultimatum from Musk: commit to being “extremely hardcore” or leave the company with three months’ severance pay.

The introduction of Twitter Blue, where users can pay $8 a month to have a blue tick next to their username, led to an inevitable influx of impersonation accounts, including "Nintendo" sharing a picture of Mario giving everyone the middle finger and "Tesla" Tweeting that their cars "do not respect school zone speed limits. F*** them kids."

Meanwhile, the accounts of controversial figures such as Jordan Peterson, Donald Trump and Kanye West were reinstated - the latter only to have it revoked again shortly after.

Throughout it all, I've still logged in daily, conflicted between wanting to leave the toxic timeline of crypto bros and rightwing ranters, but also unhealthily addicted to watching the downfall of a social media platform I once loved.

It's not all Elon Musk's fault. Twitter has been bad for my mental health for years, increasingly filled with anger and division, any sense of nuance completely lost within the 280 character count. There was even a small sense of relief for some people when Musk took it over, because it allowed them to finally walk away for good.

But Twitter has also become an integral space for people on the internet, especially journalists and writers who have used the platform to make important connections, establish their careers and build an engaged audience.

In response to Musk's changes, a lot of artists and writers have moved to other platforms like Substack, which allows users to publish subscription newsletters. Others have tried out the much-talked-about (but also very confusing) Mastodon or Hive, but none of these options quite compare.

Social media platforms come and go (RIP Myspace), so it's only natural that Twitter will eventually fizzle out, nothing more than a digital husk that once held all the hubbub of humanity. It's the awareness that it's happening right now that's so strange, like sitting in your home as it's slowly emptied around you.

I'll probably stay on Twitter until the bitter end, scrolling through the swell of psychotic takes and grovelling Musk memes. Maybe, just maybe, he'll bring back those floral backgrounds.