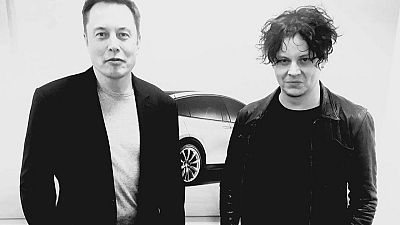 Jack White is the latest celebrity to wave goodbye to Twitter.

The musician has pulled his Three Man Records account from the platform to protest Elon Musk’s decision to reinstate Donald Trump’s account.

The ex-White Stripes singer shared a very lengthy and scathing post on his Instagram, calling out the former, twice-impeached president’s comeback as “absolutely disgusting” and “an asshole move.”

"Shame on you for giving trump and other professional liars the platform you are now in control of, and shame on anyone who does," White wrote. "And shame on you if you think it's no big deal. It is."

He directly implored Musk to “tell it like it is” – that “people like (him) and Joe Rogan (who gives platforms to liars like Alex Jones etc.)” are financially incentivised to throw their support behind figures spreading hate speech.

And he has a point.

According to research from The Network Contagion Research Institute, instances of use of the N-word on Twitter increased by nearly 500 per cent only within 12 hours of the tech mogul’s takeover on 28 October.

White did praise Musk's work with Tesla, referring to his past enthusiasm over the electric car company and the fact that he once called him “the Henry Ford of the 21st century”.

But White said that by allowing Trump to return to Twitter, "you've gone too far and are now using your power to promote horrible, violence inducing liars who are taking the country and the world backwards and endangering the democracy that made you rich and successful in the first place."

Donald Trump was officially banned from the social site on 8 January 2021, two days after his US Capitol riots.

Musk announced last weekend that he would allow Trump back on Twitter following an online public poll that voted for Trump to return.

Kanye West also had his account restored on Twitter after he was previously locked out following a series of antisemitic posts. However, Musk has somehow managed to draw the line somewhere and refused calls for conspiracy theorist Alex Jones to return to the platform.

Jack White is among many stars who have spoken out against Musk and his handling of the social media platform, and adds his name to dozens of stars who have logged off since Musk took over.

Nine Inch Nails’ Trent Reznor has recently added his name to some of the most high-profile Twitter users to quit.

Reznor said he was “ready to depart” the platform and he called Musk’s takeover an “embarrassment”.

“We don’t need the arrogance of the billionaire class to feel like they can just come in and solve everything,” he added. “Even without him involved, I just find that it has become such a toxic environment. For my mental health, I need to tune out. I don’t feel good being there anymore.”

Musk responded with his trademark tact and professionalism, calling Reznor a “crybaby”:

Explaining why she left on an episode of her show The View, Goldberg said: “It’s been a little over a week since Elon Musk took over Twitter and this place is a mess. I’m getting off today because I just feel like it’s so messy, and I’m tired of now having certain kinds of attitudes blocked now getting back on. So I’m gonna get out, and if it settles down enough and I feel more comfortable maybe I’ll come back. But as of tonight, I’m done with Twitter.”

Model Gigi Hadid recently shared that she had quit the platform and her 76 million + followers, describing Twitter as a “cesspool of hate and bigotry”.

“For a long time, but especially with its new leadership, it’s becoming more and more of a cesspool of hate and bigotry,” she wrote in an Instagram post. “It’s not a place I want to be a part of.”

Bill And Ted star Alex Winter has also left the app, telling NBC News: “Elon Musk taking over Twitter and making it a private company with less oversight has immediately made the platform more prone to hate speech, targeted attacks, and the spread of disinformation."

And they may be onto something, as there have been persistent rumours that Twitter is about as stable as a late-stage Jenga tower, especially in the wake of fleeing advertisers, Musk firing thousands of employees, and the CEO’s comments on how his remaining staff must “work long hours at high intensity.”

Is it time to break up with Twitter? Here are the alternatives