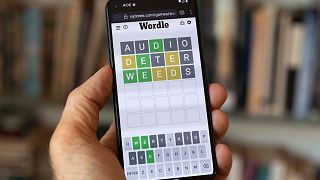 A Wordle game is seen on a mobile phone   -   Copyright  AP Photo
The opinions expressed in this article are those of the author and do not represent in any way the editorial position of Euronews.
By Jonny Walfisz  •  Updated: 23/12/2022

Day 23 of our Cultural Advent Calendar, in which we’re counting down our highlights of 2022 day-by-day all the way to Christmas and beyond. Our Highs & Lows of this cultural year continues with the mega-hit game Wordle.

One of the joys of working as a journalist means very few days are exactly the same.

Sometimes you are inundated with interviews, chatting to endless people about varying topics. Other times, you can be left to toil away on a long article in peaceful solitude. The variation is a big part of why I love writing. I wouldn’t want the certainty of a singular task repeated ad infinitum.

But there’s one exception.

Every day, at some point after lunch, I receive a text. Usually it says something to the effect of “Got it in three” or “Fifth go today”.

These texts all come from a single person. My mum.

She is, of course, referring to the viral video game hit of the year: Wordle.

My mum plays Wordle pretty much every day without fail. She sometimes gets the answer in an admirable three attempts, but often it takes a few more. But regardless of the result, she will always be on hand to let me know just how well she did.

I’m far less consistent with my Wordle-playing. But on the days I have also done the puzzle, we send each other screenshots of our journey to the answer, comparing and contrasting our differing approaches to opening words, vowels prioritised, and wildcard consonants.

For anyone who’s spent the year living under a rock, Wordle was the smash hit word game developed by Josh Wardle in 2021.

Players try to guess a five letter word through a colour system that lets you know if you’ve already guessed a correct letter in the right or wrong position of the final word.

Wordle’s popularity soared at the end of last year, and in January the New York Times bought the game from Wardle for a “low-seven figure” sum.

2022 was the year of Wordle. The game’s name was the single most Googled term worldwide, and tons of offshoot games have been developed, challenging geographical knowledge in Worldle, music knowledge in Heardle, and economic knowledge in Tradle.

As with any viral hit, Wordle’s prevalence has begun its inevitable wane.

Its time in vogue was always going to be limited, as most people would move seamlessly onto the next viral hit.

Outside of the tempestuous whirlwind of millennial and Gen-Z trends, another group of people have stayed true to Wordle’s side.

Pensioners across the world, unable to understand the complexities of “proper” video games were given something new and important to their collection of fun brain-twisting time wasters. No longer are the over-60s in our lives stuck with the choice of Solitaire, Spider Solitaire, Minesweeper, and Hearts.

It’s rare that the list of pensioner-friendly solo video games has a genuine new addition. Wordle has been just that.

For my mum, it’s been an extra source of joy in her day. And as much as I may make fun of her texts sent with almost religious reliability, each little message promoting her achievement brings me joy too. So for that, thank you Wordle.