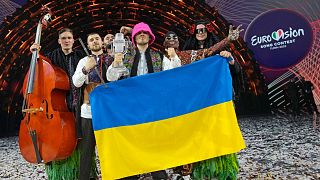 Kalush Orchestra from Ukraine celebrate after winning the Grand Final of the Eurovision Song Contest   -   Copyright  AP Photo
The opinions expressed in this article are those of the author and do not represent in any way the editorial position of Euronews.
By Theo Farrant  •  Updated: 26/12/2022

Christmas may be over, but our Cultural Advent Calendar continues until the end of the year, with our highs and lows of 2022. Today, the win of Ukraine at the Eurovision Song Contest.

Eurovision is taken very seriously in my family.

For as long as I can remember we've all gathered once a year for the glitzy pan-continental song contest. Just picture rowdy drinking games, silly costumes and a living room filled with flag bunting.

And what's not to love about Eurovision?

It's a night of unadulterated fun, where countries from all across the world come together to celebrate music, culture and diversity. And this year's competition, hosted by Italy, was without a doubt one of the most memorable and moving I've ever experienced.

It was the Ukrainian band Kalush Orchestra that were crowned the champions of the contest, in a global nod of support for Ukraine amid Russia's unprovoked invasion of the country.

While it was obvious that Ukraine were always going to win considering the context of the war, Kalush Orchestra, the six-man band that mixes traditional folk melodies and contemporary hip hop, put out an incredibly powerful song and one that's been stuck in my head throughout the year.

Their track titled 'Stefania' was written as a tribute to the frontman’s mother, but the song took on a whole new meaning since the war began, with lyrics that pledge: "I‘ll always find my way home, even if all roads are destroyed".

The evening belonged to Ukraine - and deservedly so.

But it was more than just a victory at a song contest: it was a beautiful gesture of love and solidarity for the people of Ukraine, from every corner of Europe and beyond.

“Thank you so much. Thank you for supporting Ukraine,” Kalush Orchestra said after their win. “This victory is for every Ukrainian."

The event was one of the cultural highlights of my year and I'm already looking forward to see what Eurovision 2023 has to offer.

For safety and security reasons, organisers announced earlier in the year that next year's contest will not be hosted by the winning country and it was decided that it will take place in Liverpool, England.

Despite the ongoing war with Russia, Ukraine has become the first country to select its 2023 Eurovision entry, with more than 30 other nations still to pick an act in the weeks and months ahead.

Remarkably, the contest was held underground in a metro station, which has also served as a bomb shelter, keeping Kyiv residents safe from recent Russian bombardments.

A striking reminder of Ukraine's ongoing strength, resilience and perseverance.

Watch Ukraine's entry for Eurovision 2023 below:

See you next year, Eurovision - and thank you.