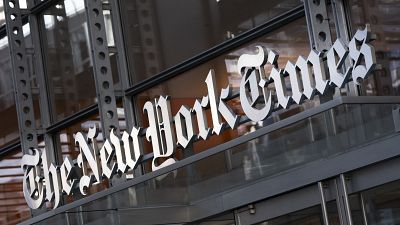 The seven-figure sum will be a boon for James Wardle, the Wordle creator who made the game for his partner during lockdown   -   Copyright  AP
By Tim Gallagher  •  Updated: 01/02/2022

A selection of green, yellow and grey squares are posted on Twitter; the timeline goes mad.

As with many online sensations, Wordle seems esoteric to the casual observer.

But with the news on February 1 that the New York Times has purchased the popular word-based game for an undisclosed seven-figure sum, the obsession over the phenomenon intensified.

Are the game's endless assortments of five letter combinations safe? Here's what we know.

What is Wordle and why has it been sold?

Players take the game so seriously that Twitter suspended accounts for tweeting spoilers.

Wordle’s almost-eponymous creator, James Wardle, has been feeling a little “overwhelmed” of late due to the increase in popularity of a game he initially made to entertain his partner during lockdown.

"After all, I am just one person, and it is important to me that, as Wordle grows, it continues to provide a great experience to everyone," he wrote in a Twitter statement.

"Given this, I am incredibly pleased to announce that I've reached an agreement with The New York Times for them to take over running Wordle going forward."

Wardle, a former software engineer for Reddit, had sole charge of the website that hosts Wordle as he watched the number of players go from 90 at the beginning of November, to 300,000 in the new year, and now millions according to the Times’ statement on the sale.

Discussing the popularity of the game in a seperate New York Times profile Wardle said, “I think people kind of appreciate that there’s this thing online that’s just fun.”

“It’s not trying to do anything shady with your data or your eyeballs. It’s just a game that’s fun,"

What next for Wordle?

The New York Times say Wordle will remain free (for now) and Wardle has confirmed that he is working to preserve the game history of players so they can retain their scores and streaks.

However, the game will join a host of other daily puzzles offered by the Times including The New York Times Crossword, Spelling Bee, and Vertex, and it is possible users will have to pay to play in the future.

The Times has previously said that it intends to become the essential subscription for every English-speaking person engaged with world events.

An update on Wordle pic.twitter.com/TmHd0AIRLX

“New York Times Games are a key part of that strategy,” the newspaper said in a statement.

The company is on a quest to get 10 million subscribers by 2025 and in November reported it had 8.4 million.

The paper’s business model is reliant on subscribers rather than traditional ad revenue and the vast majority of subscribers consume their media digitally.

At the start of this year the Times bought sports news website The Athletic for $550 million (€490 million) bringing in the site’s 1.2 million subscribers.

As well as charging for the New York Times app, the group also has cheaper subscriptions available for two other apps; Games and Cooking. In December it was reported that subscriptions for both were at over one million each.

Discussing the sale with Forbes, a New York Times representative said, “We don't have set plans for the game's future.”

“At this time, we're focused on creating added value to our existing audience, while also introducing our existing games to an all new audience that has demonstrated their love for word games.”

For now? Your streaks are safe.