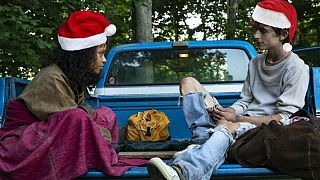 Day 20 of our Cultural Advent Calendar, in which we’re counting down our highlights of 2022 day-by-day all the way to Christmas and beyond. Our look at our favourite films of this year continues with Bones And All.

Considering two of my favourite films of the past decade are Grave (Raw), Julia Ducournau’s perfect metamorphosis story which employed cannibalism to comment on non-conformity to society’s norms, and Luca Guadagnino’s 2018 Suspiria remake, I was already predisposed to like Bones And All.

Directed by Guadagnino – who won the Best Director prize at this year’s Venice Film Festival for his efforts – and set in 1980s America, Bones And All is based on the award-winning novel by Camille DeAngelis. It sees teenager Maren (Taylor Russell) abandoned by her father (André Holland) after her cannibalistic impulses drives them to relocate towns one time too many. He leaves her with some cash, her birth certificate and a cassette tape in which he recounts his struggle to protect his daughter from the cannibal instincts she began showing since she was a child. Maren goes searching for her mother, who walked out when she was a baby, and meets several fellow “eaters” during her road trip through the backroads of America, including seemingly benevolent Lee (Timothée Chalamet) and far creepier Sully (Mark Rylance).

What follows is not the horror film you may imagine but more an intoxicating and tender character study that is by my book one of 2022’s most romantic films. It blends a coming-of-age narrative with quixotic yearning and a poetic meditation on belonging, one that proves (to paraphrase one of the characters) that the world of love wants monsters in it.

While cannibalism as an outsider allegory and the exploration of burgeoning sexuality through the prism of horror is hardly new terrain, what sets Bones And All apart is that may make your stomach churn at times, but will definitely make your heart ache.

Guadagnino shrewdly elects to never let his camera linger on gratuitous scenes of Grand Guignol gore (see: final act of Suspiria) and instead allows some beautifully shot close ups and the evocative sound design do the majority of the heavy lifting. He doesn’t shy away from the visceral facet of what it means to feed and be enslaved to a ravenous impulse, but uses the story of this Bonnie and Clyde whose survival depends on cannibalistic binges to delve into intimacy and what it means to belong. There are also some tantalizing readings to be made about how Maren and Lee are symbolic stand-ins, whether it be for the disenfranchised of Reaganism, drug addiction, or the queer community.

The overall film is not as nuanced a parable about acceptance through unconditional love as Grave (Raw) was (especially when it comes to themes of intergenerational trauma and the literal and symbolic scars parents leave on their offspring), and the final act does feel a smidge more formulaic compared to what precedes it. However, the Malickian shots which capture the dually bleak and beautiful landscapes of American countryside - courtesy of cinematographer Arseni Khachaturan - as well as the minimalistic elegy of Trent Reznor and Atticus Ross’ score more than make up for it. As for the acting, everyone brings their A-game, with terrific showcases from Chalamet, Rylance and Michael Stuhlbarg - who has a significantly more disgusting reunion with Guadagnino and Chalamet after that heartbreakingly beautiful monologue in Call Me By Your Name. And boy can that man deliver a monologue… Although this time, you’ll be grimacing rather than rinsing your tear ducts out.

And then there’s Taylor Russell, who is note-perfect and brilliantly conveys her character’s boldness and sensitivity throughout, allowing flickers of shame wrestling with a sense of liberating release to light up even the smallest of her glances.

The way she injects such humanity into Maren ensures that the film’s balancing act between romance and threat works such wonders. Through her portrayal, we feel the intimacy of young love, and understand that Bones And All isn’t about cannibalism or surviving on the fringes: it’s about what us flawed and vulnerable human beings, no matter who and what we are, are willing to do to love and be loved unconditionally. Bones and all.