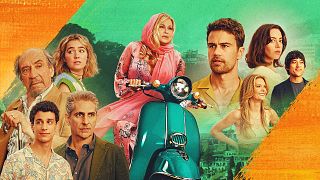 Day 9 of our Cultural Advent Calendar, in which we’re counting down our highlights of 2022 day-by-day all the way to Christmas and beyond. We're currently listing our favourite TV shows and streams of the year… Today: The White Lotus - Season 2 (HBO).

At this stage it’s a cliché to say that I’ve never seen myself represented on screen. But I’ve definitely never seen three versions of myself on screen in the same show until the second season of ‘The White Lotus’.

A drunk white woman disassociating from her life; a whiny Zillennial with a Depop wardrobe; and a gay guy fawning over Jennifer Coolidge.

The first instalment of ‘The White Lotus’ gave us a delicious satirisation of the 1%: wealthy Americans at a resort in Hawaii, hating on their relatives, deeply unhappy and blissfully unaware they’re on somebody else’s land.

This time around, with a fresh cast and one returnee (the aforementioned Coolidge), the titular hotel chain gets the Ciao Bella treatment with an Itilianification so complete you can basically taste the balsamic vinegar, as HBO serves up a fresh dish of event television.

The breakout star (which is saying something in such a strong ensemble cast) is Aubrey Plaza as the deadpan wife of a newly-minted tech millionaire. Other highlights include Tom Hollander playing an ageing queer socialite, Meghann Fahy as a woman on the edge (or is she? Who can tell), a certain scene starring Theo James and what I assume is a prosthetic penis, and Michael Imperioli’s character being screamed at down the phone by his scorned wife.

Just as in season one, the affluent guests are shown alongside the funhouse mirror of unhappy locals with seemingly free-spirited Sicilian sex workers being exploited by pimps and unhappy lonely lesbians forced to remain in the closet.

The overall effect is hilarious, chilling and high camp all at once.

At the time of writing, the show is unfinished and whatever plot twist is in the pipeline is sure to leave viewers desperate for season three. It can’t be any more shocking than a man being stabbed to death after defecating in his small-time nemesis’s suitcase, right?

The White Lotus - Season 2 is currently on HBO.