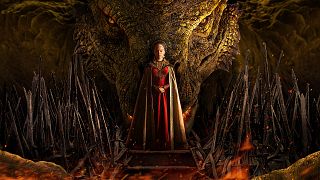 Day 8 of our Cultural Advent Calendar, in which we’re counting down our highlights of 2022 day-by-day all the way to Christmas and beyond. The first seven days were our musical favourites of the year and today, we start the next seven days with our top TV and streaming picks. House of the Dragon (HBO) kicks us off.

I started watching 'House of the Dragon' with the same energy as a bitter ex, still stewing in my disappointment over its predecessor’s ('Game of Thrones') finale and already cynical about its promises to have changed.

Haven’t we been through enough, George R. R. Martin? And while we’re at it, are you ever going to finish those damn books?

But I was pleasantly surprised, which sounds like an odd thing to say about a show that opens with an extremely graphic scene of childbirth. In fact, there’s a lot of that - like a medieval special of 'One Born Every Minute'.

'House of the Dragon' is set roughly 200 years before 'Game of Thrones', focusing on the reign of House Targaryen and the tensions bubbling over who will takeover the Iron Throne from Viserys I (Paddy Considine).

There’s the usual sex, violence and, of course, dragons, that we’ve come to expect from this world. But it feels more toned down, putting slow storytelling and character development first and allowing us to become invested in all the granular details of George R.R. Martin’s imagination once again.

If only we didn’t have to wait until 2024 for the next series!

'House of the Dragon' - Season 1 on HBO Max, whose series premiere was watched by more than 10 million viewers on the first day, the biggest in HBO's history.