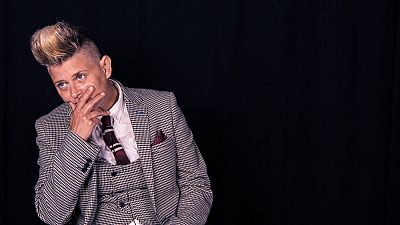 The Polari Prize is the UK's only prize dedicated to LGBTQ+ literature, and is awarded every year at a ceremony at the British Library, London.

Taylor’s collection, which won her the top £2,000 prize, tells the story of the writer’s rejection by a conventional family and her coming-of-age in Soho’s lesbian club scene.

The protests of these women, the butch subculture and their forging of underground communities in the face of intense adversity was described as a “battle cry” by the judges.

Elsewhere, Adam Smith’s “Deep Sniff” won the First Book Prize for its telling of the history of poppers in the LGBT+ community.

The Polari Children’s and YA Prize - which was awarded for the first time this year - went to Ian Eagleton and James Mayhew for “Nen and the Lonely Fisherman” about a merman who travels to the surface world.

“These are books as battle cries, as triumphs over adversity, as shamelessly gay gossip and the pursuit of pleasure in spite of all the heartaches of the past,” said journalist and author Paul Burston, who founded the prize.

Who is Joelle Taylor?

Taylor’s "C+nto" is - like her other work - intensely feminist and autobiographical, winning her the TS Eliot Prize earlier this year for its expert storytelling about the often overlooked and marginalised group of butch lesbians.

Taylor’s live performances are the stuff of legend and she regularly wows audiences with her impassioned poetry and unique delivery skills, which has seen her named a UK slam champion.

In her previous collection “Songs My Enemy Taught Me,” the poet explores her own experiences of childhood abuse and amplifies the voices of survivors around the world.

Earlier works “Ska Tissue” and “The Woman Who Was Not There” are also filled with the artist’s raw, emotional style.

“C+nto will open eyes, hearts and minds. Here is poetry that defends our right to walk without fear, wear what we choose, be who we uniquely are. A clear Polari Prize winner.”