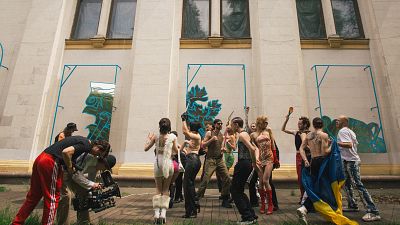 Yura Dvizhon returned to Kyiv in April, having fled the city on 24 February when Russia invaded Ukraine.

“The city was totally empty and I was so disappointed to see this, I left Kyiv right on the first day when everything happened,” says the filmmaker and LGBT+ rights activist.

“When I went back, so many of my friends were gone.”

Since the Revolution of Dignity in 2014 - which overthrew the Ukrainian Government - a liberalisation of sorts has taken place in the country, drawing many from Eastern Europe and the Caucasus to the nation. But now Russia’s invasion had caused the streets of Dvizhon’s city - once famed for its techno scene and hedonistic nightlife - to become deserted.

On seeing this, Dvizhon knew he needed to do something.

“I realised that I need to create something as a director.”

Dvizhon is the creative director of UKRAINEPRIDE, an LGBT+ NGO that promotes LGBT+ rights in Ukraine, as well as fostering a sense of Ukrainian cultural identity.

The organisation was born four years ago, when a TV show that current president, Volodymyr Zelenskyy, starred in aired a homophobic joke. In response, Dvizhon and his colleagues protested outside TV station offices in Kyiv.

Already an experienced filmmaker, Dvizhon decided to turn his attention to supporting his community in Ukraine.

“I see that in Ukraine, as a director, I can change a lot with my activism,” he explains.

“I’m trying to change stereotypes in Ukraine through my video art.”

“It was enormous to show two guys who were kissing and naked under the water. You need to make something different,” says Dvizhon.

Since then, Dvizhon has turned his attention to fashion campaigns, even winning an award at Rome International Fashion Film Festival in June for his campaign ‘Love Airlines’ with couture brand FROLOV.

Dvizhon’s current project, ‘Pride is not Available in your Area’ is the latest iteration of his LGBT+ activism in Ukraine.

Aiming to highlight the experiences of ordinary LGBT+ Ukrainians during the war, Dvizhon is keen to change hearts and minds in his home country.

The film, made with help from queer dating app Taimi, used volunteers to tell the stories of real life LGBT+ soldiers, doctors and ordinary citizens during Russia’s invasion. The filming took place in Kyiv over two days with a top Ukrainian crew.

“We were thirsty for filming, because right now it’s super hard to get a budget for anything,” says Dvizhon.

“We don’t have a lot of money to create something, I’m really happy that we’re receiving a lot of positive comments. We want to bring awareness to the war in Ukraine.”

Zelenskyy, the EU and LGBT+ rights

In 2019, a year after the TV station protest, UKRAINEPRIDE organised a rave outside the Presidential Administration Building to protest against Zelenskyy’s silence on a number of key issues.

The president had not commented on drafted legislation which was similar to Russia’s ‘gay propaganda’ laws, and had failed to commit to implementing hate crime protections for LGBT+ people.

However in May 2022, Zelenskyy retweeted Dvizhon’s post for the International Day Against Homophobia, Transphobia, and Biphobia.

“Since the war happened they’ve made six posts on Twitter about LGBT+ people,” says Dvizhon in reference to the government.

“They want to show that they are different from Russia, Belarus, or Kazakhstan where people live an extremely hard life.”

While this is reassuring for the future, LGBT+ people in Ukraine still suffer, both at the hands of Russian invaders and due to prejudice from other Ukrainians. One of Dvizhon’s friends in the army was recently threatened by another soldier due to his sexuality.

“Being a gay person in Ukraine, you need to face with Russia and all of their propaganda and also homophobic people, you need to be super strong to handle this.”

The Ukrainian war, activism and dreams of the future

Despite the dangers, Dvizhon is determined to promote the cause of freedom in Ukraine, as well as LGBT+ rights, at home and abroad.

He recently organised a Ukrainian contingent at London Pride in the UK, where ‘Pride is not Available in your Region’ was screened, and regularly gives interviews to both Ukrainian and international media.

Despite the obstacles in Ukraine, he hasn't given up hope that things can get better and dreams of holding Pride parades in territory currently occupied by the Russians.

“We have a lot of gay people who live there, we want to bring it back. It’s like a dream to hold Eurovision or Pride in Yalta.”

He hopes that one day, his beloved Kyiv will be free from war, and that people will return to party in a country where LGBT+ rights are enshrined.

“I see this progress, that’s why I’m still fighting for Ukraine.”