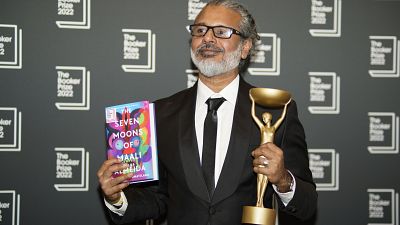 Sri Lankan author Shehan Karunatilaka has been named the winner of the prestigious Booker Prize for Fiction for his second book ‘The Seven Moons of Maali Almeida’, about a war photographer murdered in the country’s civil war.

The annual award, which was given Monday (17 October) evening at London's Roundhouse, is for a work of fiction written in English and published in the UK and Ireland.

The panel of judges hailed Karunatilaka's novel as "a searing, mordantly funny satire set amid the murderous mayhem of a Sri Lanka beset by civil war", adding that the book was a “whodunnit and a race against time, full of ghosts, gags and a deep humanity.”

Neil MacGregor, who chaired the judging panel, called it “an afterlife noir that dissolves the boundaries not just of different genres, but of life and death, body and spirit, east and west”.

Karunatilaka received a trophy from Queen Consort Camilla at the ceremony, which was the English language literary award’s first in-person ceremony since 2019. Queen Consort Camilla greeted the short-listed authors, contest judges, and performers – including pop star Dua Lipa, who gave a speech on how her love of literature inspired her music career.

A race against time in the afterlife

Set in the Sri Lanka of 1990, ‘The Seven Moons of Maali Almeida’ features ghosts and spirits in the afterlife. It follows gay war photographer Maali Almeida after he wakes up dead. He decides to find out who was responsible and has “seven moons” to reach out to loved ones and guide them to hidden photos he has taken depicting the brutality of the island’s sectarian conflict.

“My hope for Seven Moons is this that in the not-so-distant future… that it is read in a Sri Lanka that has understood that these ideas of corruption and race-baiting and cronyism have not worked and will never work,” said Karunatilaka.

“I hope it’s in print in 10 years but if it is, I hope it’s written in [a] Sri Lanka that learns from its stories, and that Seven Moons will be in the fantasy section of the bookshop… next to the dragons, the unicorns [and] will not be mistaken for realism or political satire,” he added.

Karunatilaka is the second Sri Lankan to win the award, following Michael Ondaatje’s victory in 1992 for ‘The English Patient’, which was later turned into an award-winning film.

The 47-year-old author gets a £50,000 (approx. €57,000) prize, and the five other shortlisted nominees for the 2022 Booker Prize - ‘Small Things Like These’, by Irish author Claire Keegan; ‘Glory’, by NoViolet Bulawayo of Zimbabwe; ‘The Trees’, by American novelist Percival Everett; ‘Treacle Walker’, by English novelist Alan Garner; and ‘Oh William!’, by American novelist Elizabeth Strout - are awarded £2,500 (approx. €2,800).

Last night’s ceremony also featured a special tribute to Hilary Mantel, who died last month aged 70. She was the first British writer - and first woman - to win the prize twice with the first two novels in her Wolf Hall trilogy.