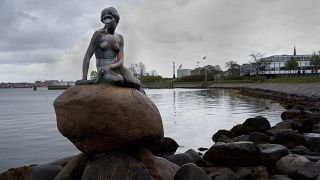 An appeals court in Denmark has increased the compensation a newspaper was ordered to pay for violating the copyright of Copenhagen's The Little Mermaid statue.

The violation took the form of a cartoon depicting the bronze landmark as a zombie and a photo of it with a facemask.

The Berlingske newspaper published the cartoon in 2019 to illustrate an article about the debate culture in Denmark and used the photo in 2020 to represent a link between the far right and people fearing COVID-19.

Both were found to be infringements of the Danish Copyright Act. Copenhagen’s district court ordered the newspaper in 2020 to pay the heirs of Danish sculptor Edvard Eriksen 285,000 kroner (€38,300) in compensation. The appeals court on Wednesday raised the amount to 300,000 kroner (€40,316).

Berlingske’s chief editor, Tom Jensen, had appealed the district court's ruling, calling the fine “completely out of proportion and far, far too high.” Jensen argued the paper had used the image of The Little Mermaid for non-commercial purposes.

In a statement, the Eastern High Court in the Danish capital agreed with the lower court that “there was a violation of copyright" in the newspaper's actions. It did not give a reason for increasing the compensation amount but noted that Berlingske is a commercial venture since it wants to sell newspapers.

The plaintiffs were the heirs of sculptor Eriksen, who created the girl-size mermaid that has been sitting on a rock at the entrance of the Copenhagen harbor since 1913.

The heirs are rigorous in enforcing the copyright to the sculpture, which runs until 2029, 70 years after Eriksen's 1959 death. Several publications have been charged with copyright infringement over the years after publishing pictures of the artwork.

Eriksen created The Little Mermaid in tribute to Danish storyteller Hans Christian Andersen. One of Europe’s most recognizable landmarks, the sculpture draws about 1 million visitors annually and has been a target for vandals who have blown the mermaid figure off its perch and beheaded or painted it.

It was also the source of controversy in 2021 over a newer mermaid statute in Asaa Havn which first showed its face in 2016.

The heirs believed that the "rival" shared too many similarities with the original and demanded the new statue be dismantled and destroyed.