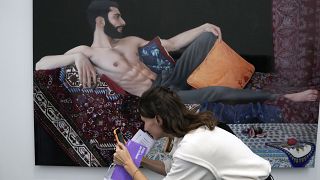 Wealthy spending more on art than ever despite pandemic   -   Copyright  Francois Mori
By Tim Gallagher  •  Updated: 11/11/2022

Art collectors are splashing out more than ever in spite of the ongoing cost-of-living crisis.

A survey of global collecting, written by Dr Clare Andrew, founder of Art Economics, found that despite the economic woes in the first half of this year, spending on art was nearly double that of the same period in 2019.

The survey, co-published by Art Basel and UBS, asked 2700 collectors from 11 regions about their habits. Interviews with these high net worth (HNW) collectors, many of whom are part of a billionaire class, have shown that they are undeterred by the ongoing pandemic, inflation, and the war in Ukraine when it comes to their spending habits.

Despite an impact on Russian and Chinese billionaires due to economic sanctions and pandemic responses respectively, billionaire wealth has doubled in the last decade.

The pandemic saw an expansion in billionaire wealth, especially for those who work in e-commerce, health and tech. The report states that despite this ‘bull run’ stalling, those at the top are still well insulated from economic shocks.

While governments have instigated emergency measures to help citizens with their energy bills to prevent wide-scale destitution and foreclosures on businesses, 78 per cent of HNW collectors remain optimistic about the future of the art market.

Meanwhile, just over half of those surveyed were planning to buy art in the next six months, and 39 per cent were aiming to sell from their personal collections.

The boom in digital art and NFTs, which saw artist Damien Hirst questioned over the ethics of burning his own artwork during a time when many are being pushed into poverty, is also yet to subside. Despite a predicted ‘crypto winter’, 17 per cent of spending by HNW collectors was on digital art, with 10 per cent on NFT products.

The carbon footprint of blockchain aside, it would seem HNW buyers are also keen to be sustainable in their purchases.

While the practices in the art industry are under more scrutiny, and art itself is targeted by climate protestors, collectors are willing to pay a premium for sustainable options when it comes to buying art.

Sustainability measures would include low-emission shipping and digital-only catalogues. However, given that international journeys to view art went up 74 per cent in the first half of 2022 compared to 2021, this premium can only reduce emissions so far.

Would you buy this painting by King Charles III?

Diego Maradona's Iconic 'hand of God' football up for auction