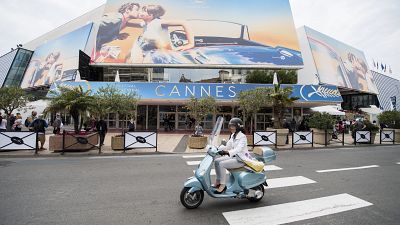 The French city of Cannes has sold some of its landmarks this week, in the form of non-fungible tokens.

The auction, which saw iconic landmarks like the Croisette and the Palais des Festivals sold off as NFTs, brought in €330,000.

All together 10 emblematic locations from the southern French city went on sale on Tuesday, offering bidders 3D models and NFTs which they can eventually integrate into the metaverse in order to make a profit by using them to host virtual cultural events.

"Until now NFTs have been limited to graphic creations. For the first time, we have put on sale NFTs linked to real estate locations", explained Arnaud Oliveux, auctioneer for Artcurial, who led the sale.

Which Cannes landmarks were available at the auction?

Cannes, which is famous throughout the world for its prestigious film festival, boasts some of the most beautiful architecture in France.

As well as the Croisette and the Palais des Festivals, the Old Port, Malmaison, and Le Suquet, the historic cradle of the Riviera city, were available to buyers.

All 10 lots found takers, with the highest bid earned by the Palais des Festivals which sold for €65,000 euros.

The Croisette meanwhile garnered an impressive €59,040, with sales totalling €331,936 overall.

An 11th site, Georges-Méliès Campus, was won by drawing lots.

Now so firmly placed in the public consciousness as to be announced word of the year 2021, NFTs are unique collectables established on a blockchain.

Blockchain technology means that the origin and ownership of NFTs can always be proven.

The tech phenomenon has found its way into every industry from wine and sport to ballet.

It is suggested that buyers of the Cannes NFTs may use them to open virtual shops or host festivals in the metaverse.

Why is the city of Cannes releasing NFTs?

Using the initiative Cannes hopes to install its rich history and heritage in the metaverse according to Mathilde Bernard, adviser to the cabinet of the mayor of Cannes, David Lisnard.

"We protect our heritage because the NFT is protected in the blockchain," says Bernard.

It is thought that the exclusive technology of NFTs will protect the image of the city in the long run.

Now that Cannes has got the ball rolling, other famous cities may soon follow suit.

"Other cities are interested in this heritage approach, particularly in the Middle East," says Charles-Henri Puaux, CEO of Pertimm, e-commerce specialist.